FORMER Zimbabwe Congress of Trade Unions (ZCTU) president, Lovemore Matombo has jumped into bed with the Zanu PF led government after his Confederation of Zimbabwe Trade Unions (COZITU) was part of a state organised May Day event at Rufaro stadium Monday. 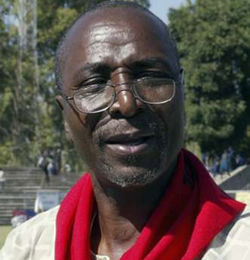 The event, which was snubbed by the ZCTU, was the first time in a quarter of a century that the government has been part of the proceedings.

However, present at the event was the Zanu PF linked Zimbabwe Federation of Trade Unions (ZFTU) and Cozitu-a ZCTU breakaway group formed after the labour groupâ€™s split in 2011.

Before the split, Matombo led a ZCTU executive which was always at loggerheads with the government for abandoning the plight of the workers while Zanu PF also accused the workersâ€™ group of siding with its opposition rivals in the MDC.

Matombo, who was not at the venue on Monday but represented during the event, could not be reached for comment.

However, Takavafira Zhou, president of the affiliate Progressive Teachers Union of Zimbabwe (PTUZ) said he knew nothing about the labour groupâ€™s presence at the rally.

â€œI donâ€™t remember any decision taken at a national level with COZITU. I understand that they could have attended the government organised workers day as independent COZITU affiliate organisations,â€ Zhou said.

â€œThat would be out of the national position which was affirmed at our May Day events that moaned the demise of workersâ€™ conditions from grace to grass yesterday (Sunday).â€

Zhou was referring to the 12 affiliate groupâ€™s May Day celebrations in Harare, Gweru, Bulawayo, Masvingo and Mutare.

He lashed out at government for alleged insincerity after organising what he said was a useless gathering when it was the same employer which had failed to facilitate constant meetings for collective bargaining.

Zhou described the workersâ€™ relationship with government as poor.

He added: â€œThere was no issue for the government to actually appear like they are now in the interest of workers when they are, for example, cancelling leave without consulting the workers.

â€œThe occasion was dominated by the politicians. It was an attempt to muzzle the voice of the workers.

â€œEnough is enough, we donâ€™t eat these promises. We want concrete pragmatic solutions.

â€œThe government must simply fulfil its mandate in terms of salaries and conditions of the workers and not to grandstand or to use workers in their diplomatic machinations.â€