BIKITA WEST MP on charges of raping and assaulting his two juvenile nieces Friday told court that he felt threatened by private prosecutor, Charles Warara, and journalists whom he once saw speaking to his estranged wife outside the court. 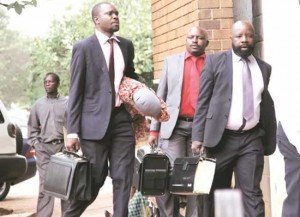 Munyaradzi Kereke warned Warara and journalists to stay away from his â€œgirlsâ€ since they were yet to finalise their break up.

The reaction was triggered by Wararaâ€™s remarks during cross examination.

Warara had said he had already noticed that Kereke was a man who loved women to the extent that he could turn a girl into a wife.

Kereke responded, â€œAll men do love women. Love is a key feature of existence and you are even one of them and I got evidence to this regard.â€

He went on, â€œMy religion allows polygamy and also the constitution. You are the same because I once saw you talking to my estranged wife and even confronted you over that because I was not happy.

Warara then told Kereke that the MP felt threatened because he knew he had skeletons in his cupboard.The private prosecutor also told Kereke that he abused the girls under the guise of (Chiramu).

The Zanu PF legislator responded that he was a devoted Christian, adding that chiramu was prohibited in their sect.

â€œMy faith does not allow fondling of breasts or kissing. We call it Gwiti and once you do it you will be caught,â€ he said.

Kereke added, â€œYou are not even allowed to touch a girl you intend to marry; you can only hand shake each other, if you cross that line you will be admonished before church.â€

He told court that he joined Johanne Marange sect in 2009 before the alleged attack occurred.

But Warara asked him why he didnâ€™t spot a beard until 2011 when their religion had a bearing on keeping beards.

It was one of the lighter moments the court experienced since Kereke took the witness stand last month.

Kereke left the court in stitches when he told court that he kept the beard because his wives loved that.

â€œThe latest one (wife) in fact loves that. I feel comfortable spotting big beard and my beard is as important as my arm is to me,â€ he said.

Warara rounded his cross examination Friday and the trial is expected to continue with Kerekeâ€™s defence re-examining him before calling his brother and security guards who want to exonerate the MP.

Kereke is accused of raping his 10 year old niece at gun point in 2010.

This was after he had allegedly indecently assaulted the other elder niece early same year.

He, however, argues that the allegations are a fabrication to tarnish his image.