ZIMBABWEANS have urged President Robert Mugabe, 92, to step down so that he can have more time to take care of his newly born grandson, reports Voice of America. 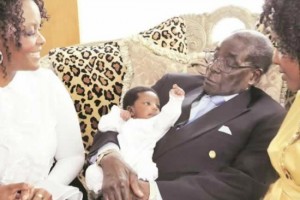 A number of Zimbabweans urged the nonagenarian to step aside in order to make way for upcoming leaders, whom they said could lead the country to economic improvement.

Mugabe became a grandfather for the first time, in mid-April, after his only daughter Bona and her husband Simba Chikore had a baby boy.

According to a News 24 report, social media went abuzz with pictures of the nonagenarian holding his grandson for the first time when he [Mugabe] went to meet him in the far East over the weekend.

An ecstatic Mugabe “met face-to-face” with his grandson, Simbanashe Chikore, in Singapore.

Speaking to the American broadcaster some Zimbabweans, however, wanted the veterans leader to step aside sooner rather than later.

A Glen View resident Phibion Gwaunza said that this would give the veteran politician, who had ruled Zimbabwe since independence in 1980, ample time to be with his family, including Simbanashe.

This was not the first time that Zimbabweans called on the veteran leader to step down.

About a month ago, Zimbabwean churches called for the “long time” president tp step down over “his failed economic policies” and “worsening human rights recordâ€.

President of the Christian Voice International Zimbabwe (CVI-Z), Tapfumaneyi Zenda, claimed that Zimbabweans had suffered enough under the nonagenarian’s “misrule”.

The veteran leader was recently endorsed by his party to run as the partyâ€™s presidential candidate in the upcoming 2018 elections.

However, Mugabe in March stated that he would onkly stand for re-election in 2018 if he was in good enough health.

Mugabe’s health was a constant source of speculation in and outside Zimbabwe. Many believed his frequent trips abroad included health check stop-offs in Singapore.