A MUM forced to leave her young sons behind as she fled political persecution in Zimbabwe is on a mission to improve the lives of women and children in danger. 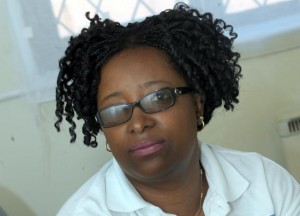 Caroline Madondo escaped her home country in 2007, fearing for her life as an opponent of Robert Mugabeâ€™s government, even though that meant leaving her two young children, one of whom was aged seven and the other just seven-months-old.

The 36-year-old, who has been seeking asylum in the UK for nine years and moved to School Street, Radcliffe, in 2014, is now joining other refugees to advocate for the rights of women and children.

They have set up the Women of Justice Arise (WOJA) group and are urging others to join their cause.

Caroline, who also has a one-year-old daughter, Angel, said: â€œMy youngest son is now almost 10, and the other is almost 16.

â€œI donâ€™t think there is a mother in the world who would want to be separated from their children at that age.

â€œThey are too young to understand why I left them. It is really difficult for me but I have to be strong for them. I am still alive and can still talk to them and help in any way I can, but there are other children whose mothers just disappeared â€“ thatâ€™s who I want to hel.”

This article is taken from Bury Times.

â€œI do not want my children to grow up in the same kind of country that I did.

â€œThere were so many of us who left in 2007 and 2008. Some are in South Africa and other places, and it has not been possible to stay in contact with them. We all just had to take any chance we could get to find somewhere safe.

â€œIt was too dangerous to bring my children, I didnâ€™t know if I was going to make it or not.â€

Her sons have lived with their grandparents in Zimbabwe since their mother had to leave almost a decade ago, and their old family home in the town of Chitungwiza was demolished by the government in 2013

But Caroline remains hopeful that political change is possible in Zimbabwe, inspired by the #ThisFlag campaign videos that have gone viral this year, and that she could one day return home.

She added: â€œWhat inspired me was to speak up for other people who canâ€™t speak up for themselves. A lot of women in Zimbabwe are raped as a means of punishment for joining the opposition, but there you cannot really speak out.

â€œI joined WOJA to help children whose parents died in 2007 or 2008. Some just disappeared, some were raped and infected with HIV. We want to help children to go to school, and to help the widows and orphans affected by politically-motivated violence.

â€œWe arenâ€™t only saying people from Zimbabwe can join WOJA, our aim is to help people from everywhere.â€

Caroline is studying for GCSEs in Maths and English at Bury College and is planning to undertake a nursing course later this year, as she tries to make a life for herself and her infant daughter.

She said: â€œAngel really wants to meet her brothers and be together as a family.

â€œItâ€™s nice to think that Angel and I can have something like a normal life. Itâ€™s still not normal when I donâ€™t have my sons. A mother should not be separated from her children like this.

â€œIt is a hard life for children in Africa and we want to do whatever we can to make it easier for them.â€