Harare - Dina Esposito, Acting Deputy Assistant Administrator in the Bureau for Democracy, Conflict, and Humanitarian Assistance at the U.S. Agency for International Development (USAID), visited Zimbabwe this week. Ms. Esposito is leading USAIDâ€™s worldwide response to El NiÃ±o. Her visit to Zimbabwe was part of a three-country trip to evaluate the impact of the El NiÃ±o-induced drought on food security in Southern Africa. 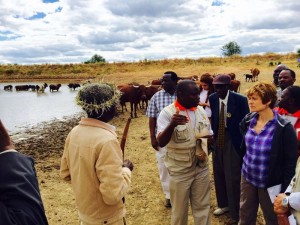 Ms. Esposito arrived in Zimbabwe on May 21 and traveled to Harare, Bulawayo, Tsholotsho, and Hwange.Â  She visited USAID activities in the rural areas and met with USAID partners, beneficiaries, other donors, and government officials.

â€œI am proud of the work of USAID and our partners in response to the drought,â€ said Ms. Esposito.Â  â€œUSAID is working with the people of Zimbabwe to meet the immediate needs of the food insecure while at the same time building resilience so that they will be able to cope with future droughts.â€

In Hwange, Ms. Esposito visited USAID-funded activities implemented by the World Food Programme (WFP). Since the beginning of the drought, USAID has provided over $50 million in emergency funds to WFP.Â  Ms. Esposito observed a food distribution where food insecure individuals received cereals, pulses, and vegetable oil â€“ one of the sites where USAID is currently funding WFP food assistance for 200,000 food insecure Zimbabweans in seven districts.Â  Ms. Esposito also visited a dip tank and a dam constructed with USAIDâ€™s assistance. Now 2,000 cattle belonging to 600 households are protected against tick-borne disease thanks to the rehabilitated dip tank, and 1,200 cattle and 400 goats will have access to a critical water source at the dam.Â  Through WFP, USAID also provided food or cash to those who constructed these communal assets in exchange for their labor, meeting their immediate food needs while also protecting livelihoods in the long-term.

In Tsholotsho, Ms. Esposito visited USAIDâ€™s Amalima activity.Â  Totaling $44 million over five years, Amalima aims to address the underlying causes of chronic food insecurity and malnutrition in rural areas.Â  Ms. Esposito visited sites where USAID assisted communities in constructing or rehabilitating productive assets, including a dam and irrigated garden, as well as a rehabilitated gully where now over 200 cattle belonging to 100 households have improved pasture for grazing.Â  She also observed a food distribution in which USAID provides monthly rations of corn soy blend and fortified vegetable oil to pregnant and lactating women and children under the age of 2.Â  Additionally, Ms. Esposito met with one of the hundreds of village savings and lending (VS&L) groups receiving technical assistance from USAIDâ€™s Amalima activity on how to pool their resources and invest in high impact income-generating activities.Â  This group engages in poultry production and has saved over $1,000 in less than two years.

Throughout her trip, Ms. Esposito met with the people of Zimbabwe to learn more about how the El NiÃ±o-induced drought is impacting their families and communities.Â  She observed first-hand how USAID and its partners are improving health and nutrition and building economic resilience to help communities cope with the current drought and protect themselves against future climatic shocks.