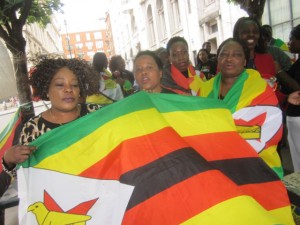 The suggestion that the Zimbabwean government is looking at ways of â€˜taxingâ€™ the diaspora may be fanciful but it is clear that both Zanu PF and the opposition are looking hungrily at the money earned abroad by the millions of Zimbabweans who have fled Mugabeâ€™s economic Armageddon.

The government, we were told this week, has drafted a Diaspora Policy which seeks to tap into exilesâ€™ remittances estimated at $1.8 billion a year â€“ way more than the country is attracting in foreign direct investment (see: Zim Citizens Working Outside The Country To Be Taxed â€“ http://zimmetro.net/index-id-front+page-zk-19691.html).

It is typical of the Zanu PF mentality that the government should think it has a claim to any of this money. Itâ€™s bad enough that hundreds of thousands of family members in Zimbabwe have become so dependent on remittances â€“ indeed appealing for ever more help.

We now learn from a prominent opposition member that their attempt to raise money from the diaspora for an election war fund has met with little response. Can they be surprised given their dismissive attitude to the diaspora down the years? To them the diaspora has only ever been a cash cow.

If the government does try to â€˜taxâ€™ the diaspora we must consider how we can pay in â€˜bondâ€™ notes. After all they are apparently good enough for the people of Zimbabwe. We will have our notes made by the same German printer.

We note that so many have fled Zimbabwe that Mugabe canâ€™t even get good cooks. The Vigil laughed at an article about this in NewZimbabwe, and particularly at this comment on the story: â€˜It seems that this report is inaccurate. Both Robert Mugabe and Grace Mugabe are excellent cooks. They have been cooking the books on the diamond sales and the Printing Press for years now. There is nothing that they cannot cook with the help of Gono and Scoones â€“ from the money supply and the wild success of the Land Reform Programme to the report on the massacre of 20 000 civilians in Matabeleland. The numbers and facts are always exceptionally well cooked. The latest dish from Master Chef Bob was to tell Patrick Anthony Chinamasa to tell the people that the Bond Notes are going to happen. The Bond Notes will flood the market â€“ again â€“ and then the close inner circle of Zanu will dupe the people of Zimbabwe to swap their genuine US dollars (held by the people) for some Zanu Bond Toilet Paper that Mugabe, Gono, Chinamasa and Scoones will sell as a worthy form of currency! If 10 million Zimbabweans have an average of US$100 each in their mattress â€“ then these cooks (or crooks?) want to get their greasy little paws on it â€“ to the tune of $1000 million US Dollars. The Diasporans need to be careful about feeding the Zanu Fat Cats in their quest to feed the families and friends. The new marketing line for Bond Notes will be â€œZanu Bond Toilet Paper â€“ the luxury you cannot afford to pay for in US$.â€ Once Bob has the US$ he needs he will then use the bond toilet paper to wipe his *#*# and be done with it, like the Matabeleland Massacres.â€™ Â (See: http://www.zimbabwesituation.com/news/zimsit-m-mugabe-complains-about-graces-cooking/).

At the Vigil supporters wrapped themselves in Zimbabwean flags to express their support for the campaign for freedomÂ  launched by Pastor Evan Mawarire which has captured public imagination (see: https://www.newsday.co.zw/2016/05/20/thisflag-idea-whose-time-come/).

FOR THE RECORD: 45 signed the register.