The African Union (AU),formerly the Organisation of African Unity (OAU),was formed in Addis Ababa,Ethiopia,on May 25,1963.Thus,May 25 is a very important and significant day on the African continent.It is a day that the whole of Africa commemorates the formation of the Pan-Africanist continental organization,the AU.On Wednesday,May 25,2016,the MDC,as a patriotic,social democratic political party,will be joining the rest of Africa in commemorating the historic and sacrosanct 53rd anniversary of the formation of the AU. 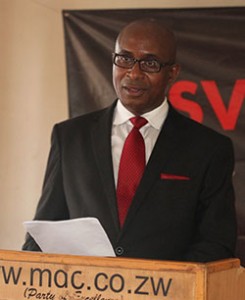 It is very ironic and indeed,extremely disturbing,that on such a historic day,the faction-ridden and beleaguered Zanu PF regime intends to stage a so-called million men march in support of President Robert Mugabe,a man who hasÂ single-handedly destroyed and trashed the hopes of millions of Zimbabweans by running down Zimbabwe’s economy as well as establishing a personality fiefdom in which the fundamental human rights and liberties of ordinary Zimbabweans are routinely disregarded and disrespected.Thanks to more than three decades of the Zanu PF dictatorship,Zimbabwe has virtually collapsed into a failed State in which more than 85% of the population are living in abject poverty and destitution.It is a notorious fact that the majority of Zimbabweans are living on less than US$2 per day.In the land of plenty,only a few thousand people,mainly members of the ruling Zanu PF elite,are enjoying the fruits of our hard won independence.

The MDC would like to unreservedly and strenuously condemn the proposed Zanu PF so-called million men march that is supposed to take place on May 25,2016.If anything,whoever is going to march on May 25 should be marching against poverty,joblessness,hunger,destitution and corruption.It is these ills that have been the hallmark of Robert Mugabe’s unparalleled mismanagement of the national economy over the past few decades.Instead of massaging the personal ego of the man who has caused the pauperisation of millions of Zimbabweans by staging a totally puerile,purposeless and wasteful so-called million men march,the Zanu PF regime or whichever of its factions is organizing and funding this thoroughly discredited march,should actually be staging a march to publicly apologise to Zimbabweans for ruining and destroying a country that used to be the bread basket of Southern Africa.They should also be staging a march to call upon Robert Mugabe and his clueless and corrupt regime to immediately step down from office in order to save the people of Zimbabwe from further suffering.
We know that peace-loving Zimbabweans are going to be commandeered and force-marched to join the so-called million men march that is essentially fascist and dictatorial in nature.The MDC would like to call upon Zimbabweans to resolutely refuse to be abused and enslaved by the collapsing Zanu PF regime.The people of ZimbabweÂ deserve to be governed by a legitimate,responsible,accountable and transparent government that will assume political power through free,fair and credible elections.The Zanu PF regime is essentially illegitimate after it unashamedly stoleÂ the people’s vote and riggedÂ the elections that were held on July 31,2013.This is a rogue and renegade regime that hasÂ neither theÂ political nor moral authorityÂ to remain in power a day longer.
Zimbabweans should draw a line in the sand and thus proceed toÂ resort to all lawful and constitutional means that will ensure that the morally repugnant and insipidly corrupt Zanu PF regime is send packing sooner rather than later.
MDC : EQUAL OPPORTUNITIES FOR ALL
Obert Chaurura Gutu
MDC National Spokesperson
Post published in: Featured