POLICE have dismissed an application by retrenched Alpha Media Holdings (AMH) workers to demonstrate at the publisherâ€™s Granite side offices fearing that the event could result in chaos. 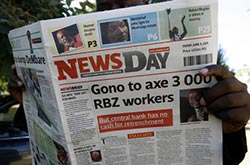 AMH is a private media company owned by Trevor Ncube and publishes Newsday newspaper, two weeklies The Standard and The Independent and the Southern Eye, an online newspaper.

The former workers were seeking permission to demonstrate against non-payment of their outstanding salaries and benefits accusing the AMH management of employing new staff members and refusing to hand over the required documentation to the Retrenchment Board.

Last year, the company took advantage of the Chidyausiku July court ruling and sent home more than 70 workers. The ruling had gave firms the right to dismiss workers via a three month notice.

AMH later appealed to the Retrenchment Board arguing that it was unable to pay the retrenched workers because it had not been generating meaningful revenue from sales and advertising since January 2014.

Then the presiding officer ordered AMH to furnish the board with names of employees whose contracts were terminated, the package each employee was supposed to be paid, current wage bill and its bank statements in their next board meeting.

Officer Commanding police Harare district Chief Superintendent B Ncube wrote to the former workers that the peaceful demonstration had not been approved, advising them to approach the Labour Court to solve their issues with their former employer.

â€œI regret to inform you that the peaceful demonstration has not been approved because the aggrieved party should approach the Labour Court and have their matter solved through legal channels.

â€œProperty may be damaged if both parties may fail to reach consensus.

â€œMoreover, a 14 day notice is required for any intended demonstration in terms of the Labour Act.â€

Superintendent Ncube added that ZRP Braeside Police Station have been informed to make sure that the demonstration does not take place and monitor AHM offices.