â€œIâ€™m not really looking forward to the India tour,â€ a friend in Harare emailed last month. â€œWeâ€™ll likely lose, adding another layer of despair to the giant s*** sandwich Zimbos are munching on at the mo. Stillâ€¦ beer! Cricket! Cool, sunny days!â€ 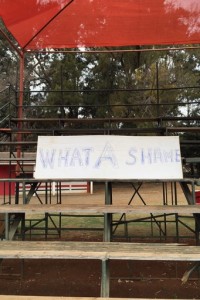 Only as the Indians began their chase before lunch on Monday, the silence around the empty ground was broken by a series of loud whistles at the end of Harare Sports Club. Â© Getty Images

Itâ€™s fair to say that the prediction has come to pass. Despite playing against an Indian side that is barely recognisable to anyone outside India, Zimbabwe have slumped to heavy defeats, with the second match requiring less than 62 overs to be wrapped up.

As the Indians began their chase before lunchÂ on Monday (June 13), the silence around the empty ground was broken by a series of loud whistles at the end of Harare Sports Club that is always inhabited by Zimbabweâ€™s most ardent fans, who call themselves the Zimbabwe Cricket Supporters Union (ZCSU). With a chairman and a secretary, they take themselves seriously and have been known to put out statements â€“ most recently when Zimbabwe Cricket announced their latest round of changes. Generally, they are a noisy, passionate group, and when Zimbabwe do well, the singing and dancing creates an atmosphere as good as anywhere in the world.

But on Monday, they were not happy, and the target of their ire was the players. â€œZim cricket players should be arrested and face TREASON!!â€ read one banner. Another said: â€œWe cannot support disaster, catastrophe and quagmire of epic proportions.â€

Usually the ZCSU conducts business from Castle Corner, which they even list as their address on official-looking statements, but on the day, they had abandoned their post and moved to a nearby stand as part of their protest. In their place, they left a lonely placard reading: â€œWhat a shameâ€. Under cloudy skies on a miserable winterâ€™s day, it cut a lonely picture.

â€œWe have changed the administrators, the selectors and the coaches. Now we need to change the players,â€ said one of the supporters. That seemed to be the common consensus among the crowd of around 30, many of who play club cricket around Harare. The decision to sack Dav Whatmore was also a bone of contention.

On the walk back around the ground, we encountered a dreadlocked fan. â€œWhat are you doing talking to those clowns?â€ asks Nyasha. He points out that the players can hardly be vilified in such a manner when the country itself is crumbling around them, and the domestic cricket structure is so poor. He has only recently returned from Canada, but seems to have summed up the situation well.

Between 2009 and 2012, when a government of national unity came in and the US dollar was adopted as official currency, Zimbabwe rallied and so did its cricket. But over the past four years the country has returned to a slow state of decay. So has its cricket.

That has been accelerated in the past few months, when a chronic shortage of cash around the country has exacerbated the lack of economic activity. Long queues have formed outside banks and ATMs, some of which now dispense as little as US$ 20 at a time. The crisis has eased slightly now that we are in the middle of the month and salaries have been paid, butÂ on Friday,Â I witnessed a queue outside a bank in the middle of town. Later that day, one of the television producers who was shooting â€˜colour piecesâ€™ in town for the cricket broadcast was stopped and questioned by police for filming a similar queue.

These difficulties were what the friend was referring to in his email. The economic decay can be seen in the usual places, such as the potholed roads and the empty shops around town. Those without employment mill around, or join the ranks of the informal sector. At every intersection there is at least one person trying to sell airtime for your phone, flags or selfie sticks. Whilst having lunch at a respectable hotel in townÂ on Friday, a man approached to ask for money so that he could phone his relatives abroad and request a money transfer. Times are tight.

But in time honoured Zimbabwe fashion â€“ as the email suggested â€“ there is also a jovial atmosphere to be found in some places.Â Saturdayâ€™sÂ game saw the ground around three-quarters full, and afterwards the pub at Harare Sports Club was carnage as even more people piled in. There was barely space to stand as a DJ thumped out his tunes and liquor flowed. No matter how bleak the going may be, the Zimbabwean desire for beer and good times in the sun never fails.

Tristan Holme is a freelance cricket writer who divides his time between Zimbabwe and Cape Town. He tweetsÂ @tristanholme.