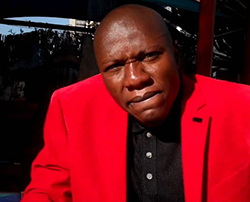 Below is the full interview;

ND: Why have you left People First and gone back to Zanu PF?

JK: There is no direction in People First. When you see leadership already fighting before even going to congress, it tells you that you are all going nowhere. We have differed especially around democracy issues. I had been thinking that we were going to have elections soon to elect leaders for all levels of the party but instead of electing people, they are selecting people. They are doing what is called guided democracy.

ND: You continuously refer to them as â€œtheyâ€, who exactly are you referring to?

JK: These are the people who surround Amai (Mujuru), the likes of (Silvester) Nguni, the (David) Butaus, (Dzikamai) Mavhaire; but if you deeply look at all their backgrounds, you will not find any trace of successful leadership that they have achieved. The unfortunate thing now is that Amai was beginning to trust so much in them to a point of even refusing to meet her own supporters to hear their grievances. Under such circumstances, I felt the best way forward was to return home. Home is best.

ND: Were you at any one point denied access to Mujuru?

JK: Indeed. Only last Friday some youths wanted to register their complaints to Mujuru to say that the party was being sabotaged by these people, but Amai refused to meet them. I felt if we could be denied access to our leader when she is still in opposition, what more when she is in power? Hapana dhiri. I thought it was better to return home where I had easy access to vaMugabe and could freely speak about my grievances. So I have gone back.

ND: How would you describe Joice Mujuruâ€™s leadership at People First?

JK: She has hardly done anything yet so it is difficult to judge her. But what I have seen so far is that she is a leader who is very undecided. In fact, all her decisions are being made by people surrounding her. The Ngunis are making all decisions on her behalf.

ND: How have you been received in Zanu PF?

JK: Oh, overwhelming, hey! It is only now that I realise that I had been lost. I had pressed the wrong button, made a wrong turn.

ND: There are a lot of negative comments you have made against Zanu PF when you were with People First; at one time saying you were Saul and had changed to Paul. Are you now going to retract them?

JK: Asi handina kutuka ka paye paye (but I never insulted anyone there). I said all those things out of anger because of what I had gone through. Sometimes you can make decisions out of anger then you realise later you have messed up. As a human being, sometimes you make a lot of mistakes and I am going to withdraw all those words, and I am going to work to make sure that whenever I see or believe that my party is making mistakes, I now understand and know how to solve those problems.

ND: When you left Zanu PF, you were linked to the Mujuru faction. You are going back to the same Zanu PF which has been split into two factions again, which faction are you joining this time?

JK: The word faction refers to only a handful people. I must not get worried about 20 to 30 people of their own different minds, be it Lacoste or G40. I am concerned about taking Zanu PF forward, not backwards. So I will try by all means to encourage other people to desist from factionalism and focus on real issues which will take our country forward, not backwards.

ND: Before you left Zanu PF you had been linked with Chipangano for quite some time. Do you see yourself reviving Chipangano now that you are back?

JK: (Laughs) I canâ€™t continue using old systems, something that is no longer in fashion. We are coming on board with new strategies on how to win an election. I have said before that, that was a time of madness and I was doing it because I was still young and now I am a matured politician. I know what is needed by the people of this country. Itâ€™s not violence, itâ€™s not taking them to meetings by force and so forth. What they want to see is food on the table, so I will try by all means to encourage other young people to desist from violence. So I donâ€™t think that Chipangano would be revived. No, no, no we have got new systems of mobilising people, engaging people, one on one, in a peaceful manner. I will sell my partyâ€™s manifesto to them and if they donâ€™t like it, I will still move on.

ND: You have been linked to Temba Mliswaâ€™s YARD, will you still subscribe to their ideas now that you are back in Zanu PF?

JK: As long as their ideas have anything to do with taking this country forward, I will support the ideas. There is nothing wrong with supporting an idea which is bringing good to the nation. What I only hate is for people to attack the current (national) leadership while you yourself are bringing nothing to solve the problems affecting the country.

ND: There have been strong suspicions many former Zanu PF people now with People First long to go back to the party. As someone who has worked closely with them, how strong is the desire to return to Zanu PF among People First politicians?

JK: I am definitely not the only one who wanted to go back to Zanu PF. You are going to see wonders guys. I can tell you that all those I converted to being People First have called me asking why I went back to Zanu PF and I am quite convinced they are coming back with me to Zanu PF.

ND: How has been life outside Zanu PF? There is a feeling that most people are in Zanu PF because it provides avenues to quick riches.

JK: No, if you leave Zanu PF today, you can still live a normal life. I was in that situation and was never worried about my livelihood. After leaving People First, I could as well have joined MDC, Mavambo, or Zimbabwe First but I decided to go back to Zanu PF because it is a party with policies that I feel can take the country forward.

ND: How do you rate People Firstâ€™s chances of winning the 2018 elections?

JK: I doubt if they can win anything in 2018. They could scrap only 4 percent of the national vote. You know, forming a political party from scratch is not a joke. Itâ€™s very difficult to win the minds and the hearts of the people. What Zimbabweans need now is not sloganeering or oneâ€™s facial looks. As from the time People First unveiled its blueprint, they have failed to implement a single thing in it. People do not eat papers; to say you have released a paper and we are now eating that paper. Itâ€™s unlike Zanu PF which released its ZimAsset blueprint and we saw a few days ago people being given 1,500 hectares of land to build houses while some youths are being given loans to do businesses.

ND: What would be your response to those who view you as a traitor?

JK: You canâ€™t blame them. That is how they see things. In life, we often try to judge each other in different ways. By calling me a traitor, that would be a way of trying to return me back to where I am coming from. I will not respond to that although I will feel insulted. But what I can tell you is that it is rubbish. It is like from the day I have accepted Jesus; I will not go back to the devil. That will not stop me supporting a party that wants to improve peopleâ€™s lives.