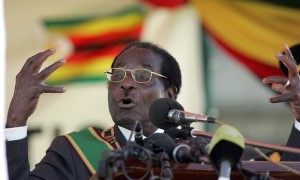 To the casual observer, nothing much seems to have happened in Zimbabwe in recent years: Robert Mugabe, the worldâ€™s oldest head of state, remains president and Zanu-PF is still the ruling party more than 35 years after it took power.

But there has, in fact, been a tectonic shift. Like Zimbabwean society itself the opposition has become deeply fractured and any meaningful cooperation between the multitude of opposition parties seems unlikely. Moreover, this fragmentation has affected Zanu-PF itself â€“ and thatâ€™s a big deal.

Of course, the party has always been riven by factions but much of what has made Mugabe so successful has been his uncanny ability to manage these conflicts and turn them to his advantage.

A sense of balance has been key. Internal opponents and troublemakers were isolated and, where necessary, excommunicated or worse. Others were rewarded for their loyalty. In doing so, Mugabe has for nearly 40 years managed to prevent schisms from becoming wide enough to threaten the party.

That has now changed. Over the past 18 months, an unprecedented purge has effectively demolished this delicately balanced edifice. Most conspicuously, former vice-president Joice Mujuru and many of her allies were expelled from the party in 2015.

Mugabe is 92, and with elections on the horizon, Zimbabweâ€™s political atmosphere is becoming increasingly turbulent as a miscellany of groups and individuals compete for the right to take over when Mugabe dies, or is no longer capable of running the show.

A driving force behind the new ructions in the party is the first lady, Grace Mugabe. Since the ousting of Mujuru, Grace and her faction have antagonised and provoked ambitious groupings around vice-president Emmerson Mnangagwa and various security services chiefs. Many fear that violence will erupt when Mugabe dies.

Meanwhile, Mujuru and other former Zanu-PF members have joined the unfamiliar ranks of the opposition. Many people, both inside and outside the country, see Mujuruâ€™s newly announced party, Zimbabwe People First (ZimPF), as the potential leader of a coalition capable of garnering enough support to win elections, due to be held in 2018. Thatâ€™s assuming agreement can be reached between opposition groups.

However, Mujuru â€“ like Mnangagwa and others who are trying to reinvent themselves â€“ faces significant problems. Awkward questions have arisen about their involvement in an event that many former Zanu-PF members would prefer everyone forgot.

That event is the Gukurahundi, when thousands of Ndebele speakers were killed by the armyâ€™s fifth brigade between 1983 and 1984. The pretext for these massacres was the emergence of a â€œdissidentâ€ or bandit problem in Matabeleland, which the government alleged to be orchestrated by the rival political party, Zapu, under Joshua Nkomo.

Mnangagwa, who is vying for the presidency, recently denied a statement he is said to have made in 1983, quoted in a book by lawyer David Coltart. In it he allegedly threatened to burn down â€œall villages infested with dissidentsâ€ and asserted that the campaign against dissidents could only succeed if the infrastructure that nurtured them was destroyed.

Coltart pointed out that he had done nothing more than cite a contemporary account from 1983 in the state-run Chronicle newspaper.

Such statements were regularly issued by Zanu ministers in that period and enthusiastically reported by the state-owned media. Mugabe, for example, said in April 1983 that â€œcommunities which sympathised with dissidents must not be shocked when the government viewed them as enemies of peace as much as the dissidents themselves. Communities which helped dissidents must not be surprised if they were punished as severely as the dissidents.â€

Discomfort over the Gukurahundi massacres is not confined to the Mnangagwa faction. A prominent defector to Mujuruâ€™s ZimPF is retired brigadier-general Agrippah Mutambara, who was in 2007 accused by Judith Todd, the daughter of a former Rhodesian prime minister, of rape.

In her memoir, she claimed Mutambara assaulted her after she approached the government with evidence of the fifth brigade atrocities, and was instructed to liaise with him by Solomon Mujuru, then chief of the army and Joice Mujuruâ€™s late husband.

Mutumbara has never responded to these allegations, but the bad news for Mujuru is that such exposure is set to increase rather than decrease with time. This claim, like that involving Mnangagwa, has long been a matter of public knowledge, but a great deal of new information is due to emerge as Mugabeâ€™s end draws nearer.

Archives in Britain, Australia and America, which are a treasure trove of formerly classified information on Zimbabwean events during the 1980s, are also progressively disgorging masses of documents which will make for uncomfortable reading for those who were politically active in that period.

The threat posed by such inconvenient truths is well illustrated by the case of Didymus Mutasa, a long-time confidant of Mugabe who left the party with Mujuru and who is a high-profile founding member of ZimPF.

Mutasaâ€™s latter-day conversion to democracy has come under fire from Jestina Mukoko, an activist who was abducted and tortured by government agents in 2008 when Mutasa was minister of state security.

Mukoko has since taken Mutasa to court, declaring that â€œit does not change anything that he is no longer with Zanu-PF and he is now with People First; he is still Didymus Mutasa â€¦ The message to Zimbabwe is that as Zimbabweans, we need to hold people to account. People need to be responsible for their actionsâ€.

In March, Mutasa responded to Mukokoâ€™s calls for him to expose the men who attacked her, telling the Zimbabwean Daily News site that he was unable to name them due to the Official Secrets Act.

Either way, Mutasa and others like him will have to become more accustomed to the prospect of legal action â€“ and the humiliation it can bring.

Where does all this leave Mujuru? In an attempt to present her party as something more than stale broth thatâ€™s has been reheated, she has mentioned the need for a national truth-telling exercise, similar to Desmond Tutuâ€™s truth and reconciliation commission. Yet, for many, a yawning credibility gap is likely to widen for as long as she remains silent about the histories of those in her own ranks.

Mujuru herself has been implicated in the Gukurahundi by diplomatic documents. An Australian cable released last year recounts a conversation with Eddison Zvobgo, a member of Zanuâ€™s central committee, at the height of the killings in 1983.

Zvobgo spoke of a â€œdecision of the central committee that there had to be a â€˜massacreâ€™ of Ndebelesâ€. Before the inception of the politburo in 1984, the 20-member central committee was the partyâ€™s peak policymaking body â€“ and Mujuru was a member of it, as were Mnangagwa and Mutasa. In other words, the trio â€“ all of whom seek power in a post-Mugabe dispensation â€“ are said to have participated in a formal decision to launch the Gukurahundi.

Mujuru is yet to react to this disclosure. An honest account of what she saw, heard â€“ and did (or failed to do) â€“ during the Gukurahundi and other periods of abuse would win her the support of many Zimbabweans who yearn for real reform. On the other hand, such a move could alienate a large constituency within her fledgling party.

But the risks of inaction are also significant. Sooner rather than later, Mujuru will have to choose whether she will be a leader or a political operator; whether she will lead a movement or just another of Zimbabweâ€™s opposition parties.

Her dilemma is, in a sense, that of the nation itself. Mugabeâ€™s death will lead to either regression, continued stagnation or some form of genuine change. Given the backdrop â€“ which makes for an â€œoperating systemâ€ riddled with malware â€“ options one or two seem most likely.

At the same time, history is about human beings and the choices we make. That is why Zimbabweans, despite the crushing disappointments of the post-independence period, keep hoping against hope that change will come.

A version of this article first appeared on the Daily Maverick

Dr Stuart Doran is the author of a forthcoming book on the 1980s killings in Zimbabwe â€“ Kingdom, power, glory: Mugabe, Zanu and the quest for supremacy, 1960â€“87