ANGRY protestors who caused the closure of Beitbridge border post Friday had by evening torched a warehouse belonging to the Zimbabwe Revenue Authority (ZIMRA). 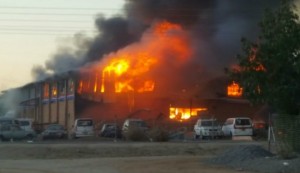 The protests were sparked by ZIMRAâ€™s implementation of the controversial law banning importation of some basic commodities.

In the morning, South African Police reportedly blocked crowds who had marched all the way from Musina Town intending to force their way through to the Zimbabwean side.

The marchers included South African business people and other foreigners based that side. They were angry with the ban as their businesses are heavily reliant on Zimbabweans buying from them.

As the day went on Zimbabweans took the protest to another level, rolling stones and abandoned vehicles onto the road. The roads were littered with stones and drums all the way from the boarder to the Masvingo turn off along Bulawayo Road. As the people blocked the roads the police didnt stop them, residents who spoke to Newzimbabwe said.

At sundown, a ware house was torched while trucks were stranded having been blocked from proceeding. Although nobody said how exactly the fire started those who spoke to Newzimbabwe said the widely held view on the ground was that the buidling was torched.