â€œIf you once forfeit the confidence of your fellow citizens, you can never regain their respect and esteem,â€ advised President Abraham Lincoln. 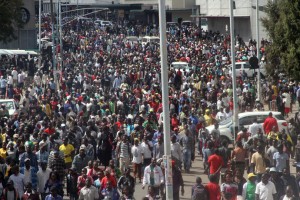 President Lincoln â€œakataura seane muti mudama!â€ (spoken as if he has magic in his cheek!) as one would say in Shona to underline the wisdom behind each word. Sadly Mugabe is not the type to listen to any words of wisdom, because I am sure someone must have warned him of the futility of trying to fool everyone all the time.

Ever since Mugabe got into power back in 1980 he has promised the people mass prosperity, â€œgutsa ruzhinjiâ€. Yet, other than for the first two years and two or three years later, the Zimbabwe economy has been on steady downward decline; Mugabe has always had a ready excuse for why it is so with half a dozen other excuses to spare. He has definitely fooled many of the people many of the times but as the economy continued to sink and the people got poorer and poorer his score on the number of people fooled and the frequency he fooled them started feeling the ill effects of the law of diminishing return.

In economic terms, the law of diminishing returns states that in all productive processes, adding more of one factor of production, while holding all others constant (ceteris paribus) will at some point yield lower incremental per-unit returns.

Since the rigged elections of July 2013 Mugabe has suffered from the ill effects of the law of negative returns; the more he has tried win back the confidence of the voters by lying to them the lesser the number of people who believed him. There is just a limit to how often one can recycle a lie and expect people to still believe it.

Mugabe promised the people 2.2 million new jobs to be delivered by 2018 in Zanu PFâ€™s election manifesto, for example, and yet three years into that five year window the regime has failed to create any jobs. Instead the country has continued to lose existing jobs as the current economic meltdown got worse and worse send the unemployment rate soaring into the stratosphere of 90% plus.

The regime has mounted a concerted rear-guard defence and blamed â€œthe sanctions imposed by the West on the countryâ€. If the excuse had worked in the past it certain was not working now; if for those who have never understood what these fabled sanctions were about, they did not fail to notice that the regime had promised the 2.2 million new jobs know of the existence of these sanction. The sanctions were imposed in 2002 for Peteâ€™s sake and regime had referred to them often enough to know about them and factored they effect in crafting its manifesto.

The most significant chunk of the population Mugabe has fooled in the past but could not fool no more was the war veterans. It is no exaggeration to say the war veteransâ€™ willingness to be used as Mugabeâ€™s storm troopers harassing, beating, raping and even murdering ordinary people to force them to vote for the tyrant since 2 000 is what has kept Mugabe in power.

Mugabe and the war veterans fell out big time when the tyrant failed to keep his promise of a better life for all the veterans. It was the war veterans who spearheaded the seizures of the white owned farms only for them to driven off the farms with not even a thank you. The pension and school fees for their children the regime had promised not paid for months or even years on end, especial in between election cycles.

Of course it was plain for all to see Mugabe only cared about war veterans during elections when he needed their help; after elections he could not care less.

In February 2016 the war veterans planned to hold a meeting to press their demands for a fair share of the looted national wealth which Mugabe and his cronies were keeping to themselves. Mugabe is a dictator and like many other dictator he does not like anyone dictating anything to him. His response to the war veterans was swift, ruthless and decisive; he the lot tear-gassed and shot with water cannon.

Considering these were the men and women who had terrorized innocent people to keep the tyrant in power whom he was now kicking in the teeth; it was impossible not to laugh. Of course it served them right!

Mugabe lost the confidence and political support of millions of ordinary Zimbabweans and the worsening economic situation has forced them to go out on the street to demand any end to their economic hardships. The public support for the #ThisFlag and Tajamuka/Sesjikile has forced the regime to come up with its own response.

On Wednesday 20 July 2016 up to 10 000 Zanu PF Youths marched through Harare. Whereas the #ThisFlag people were demanding that the government must address the problem of serious unemployment, corruption, etc. the Zanu PF Youthsâ€™ demand was a simple one â€“ that all protests critical of Mugabe and Zanu PF must stop.

â€œThey (pro-democracy protesters) can ignore our warning at their own peril,â€ a top Zanu PF youth league official said.
â€œThose that may choose to go ahead with their protests will have themselves to blame. Zanu PF is the only party that has a history of defending the country and, as youths, we donâ€™t hesitate to defend our President.â€

It was not surprising to hear them threatening everybody because they are Zanu PFâ€™s new thugs for hire! The party has promised to pay them by giving them stands to build their own houses. In the past the party promised the youths jobs but has failed to deliver and so now it is giving them land. Only a select few will get the land but where will they get the money to service the stands, build the houses, furnish them, etc. since most of these youths are unemployed. It is almost certain the party will not give them any further help.

As soon as the elections are over, Mugabe and Zanu PF will forget these youths just as it has forgotten the war veterans and many others before them. There is no doubt that the Zanu PF Youth members know they have been recruited to harass, beat, rape and even murder all Mugabeâ€™s political critics as for their reward for doing all this dirty work; the tyrant will promise them the moon on a silver platter but they too will face the economic hell the rest of the population are facing.

Even if Mugabe gives them a beautiful house with everything they ever dreamt of, they have to know that this was a reward for harassing, beating, etc. the fellow country men and women whose only crime was to ask for freedom, liberty and justice for all Zimbabweans!

As a nation we have had far too many individuals who have sold-out their body and soul to the devil for selfish personal gain; it is high time we held these modern day Judas Iscariot to account. All those Zanu PF Youth who take the law into their own hands and take it upon themselves to deny anyone their democratic right to protest peaceful will be held to account. In this day and age of mobile phone and nothing that takes place in public can ever be hidden it should be easy to find out who did what and when.

â€œThose who deny freedom to others deserve it not for themselves and under a just God cannot retain it,â€ said President Lincoln. Some more â€œmagic in the cheekâ€ wisdom.

The best that these Zanu PF Youths will ever do is delay regime change but not stop it. Regime change is upon us and woe to all those who will be caught on the wrong side of history, when it happens!