Allow me to air my view on evil Mugabe and Zanu PF. I vividly remember in 1980 when I was a young boy in the new Zimbabwe, when I heard screams and shout of jubilations among my members. I asked my uncle Ephraim whatâ€™s going on and what he said to me is still as fresh as dew in my mind. â€œGrandson, he said in his pompous voice, we have achieved democracy now itâ€™s us the people rulingâ€ Uncles definition was spot later in life I realised that, in theory, democracy is the best form of government. 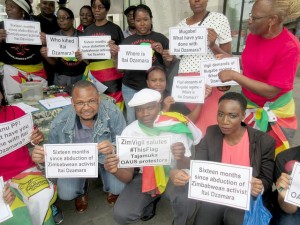 It is the government of the people as distinguished from the government of an individual or of a class of people. It makes all the citizens interested in their country by giving them a voice in legislation. It gives them a feeling of importance and a sense of responsibility. It thus gives a meaning to their personality. Another merit of democracy is that it is less liable to revolution than other forms of government. Since people themselves elect the members of government the need of a revolution does not arise. In additions to this, a democratic government usually guarantees freedom of thought and speech. This twofold freedom is a very great advantage as it enables the individual to grow freely. Democracy thus offers the most favourable atmosphere for the development of the human personality.

But democracy has its danger. The greatest of which is that it may be the rule of ignorance. â€œNine people out of every ten”, says Carlyle, â€œare fools” and citizens who are not sufficiently intelligent or educated are likely to commit errors of judgment in the casting of votes. The best men may thus fail to get elected. Elections are usually matters of propaganda. However, the voters in countries like Britain and America have not proved so lacking in judgment as many of the opponents of democracy would have us believe, though it is true that our own country the people, being illiterate, rarely give evidence of sound or independent judgment. Another critic of democracy is that it is wanting in efficiency. For prompt and effective actions, unity of action is essential.

â€œOne bad general”, said Napoleon â€œis better than two good ones”. In a multitude of minds, much unprofitable discussion takes place, whereas unity of control is needed for a vigorous national life. According to Newman, for example, the British government cannot cope with the emergencies created by war as effectively as a dictator can. This criticism, however, is not very convincing because in times of war the British prime minter usually wields the powers of a dictator. During world wars, for examples, Sir Winston Churchill faced few real difficulties as a result of the system of democracy in England. A sounder criticism of democracy in times of war would be to say that secrecy in military affairs becomes difficult, if not impossible, and that the oppositions usually lowers the morale of people by its loud condemnations of the actions of the Cabinet.

It was thought that the two world wars had made the world safe for democracy, but this forecast proved to be wrong. While democracy worked quite well in France and the English speaking countries, most other countries swung towards dictatorship, as in the case of Zimbabwe under Mugabe. So successful and powerful did their dictatorships become, that the days of democracy seemed to be almost over. Thanks for that uncle Bob and your greedy and brutal cronies.

Unfortunately, the methods of dictatorship are, and have to be, ruthless. Dictatorship employed force and violence to maintain itself. It resorts to physical compulsion, person, concentrations camps censored, intimidation purges and execution. In Zimbabwe right now countless execution was ordered for the sanity of dictatorship. A dictatorship cannot brook slightest oppositions.

Dictatorship is certainly not without its merits. As carryall points out, society is an organism. And not a machine. Now mechanical system like the ballot-box can, therefore, prove satisfactory. The safer course is it gives all power to a dictator. The dictator must, of course, be one who has exception amity to organize, direct and admitter. Parliamtary rule usually means gomer by clues of politicians whose purviews dictator on the other hand, can concentrate all his emerges towards the upliftment and improvement of his country.

Thus, there can be no freedom of thought or speech under Mugabe and Zanu pf. Intensive propaganda is employed, as is the case now, to retain the sport of the people. Dictatorship, therefore by its very nature hampers the free development of the human personality. It does not owe for divest of political option and belief, but tends towards political regimentations or standardizations of human beings. The greatest danger of dictatorship, however, is its partiality for war as an instrument of national aggrandizement. Practically every dictate preaches war, partly because he is actuated by personal opinion and partly because he suffers from an exaggerated anaionslism. With this I urge Mugabe and Zanu PF to go!!!