Please show solidarity with Zimbabweans today in Pretoria. The demonstration target Pretoria CBD, Union Building and the Zimbabwean embassy. Those leaders in South Africa and Zimbabwe who are saying the demonstrations in Zimbabwe are caused by foreigners are liars. 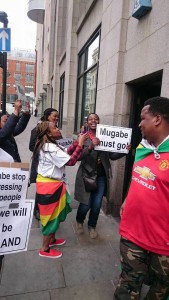 CRUEL LIARS bent on propping up Mugabe’s dictatorship which is collapsing. We call for solidarity from our South African brothers and sisters to stand up with Zimbabwe as we battle the evil ZANU PF government of the stone age president Robert Mugabe. Right now thousands of Zimbabweans are being starved to death. People are being murdered by this government some are being buried in mine shafts and ZANU PF owned farms. Any political and church leaders supporting Mugabe’s bloodthirsty regime are self seeking and are doing it for financial or political benefit. Real leaders will stand up with oppressed people.
Reasons why Zimbabweans are rising up against Mugabe:
Mugabe is a murderer who murdered 20 000 Ndebeles in early 1980s.
Mugabe has recently murdered Itai Dzamara (a human rights activists) and many other activists.
Mugabe’s government (ZANU PF) has failed to run the Zimbabwean economy and as a result Zimbabweans are starving to death.
Mugabe’s government has banned importation of commodities whereas people are starving.
ZANU PF government is violating our human rights. The police, CIOs, Soldiers are beating up civilians who dare criticize Mugabe’s government.
Mugabe is too old to be president, he sleeps in meetings, he wets himself at SADC meeting in Botswana how can we Zimbabweans be lead by such a person?
Mugabe and his thugs in ZANU PF government have looted $15 billion worth of Diamonds.
Zimbabweans we are intelligent enough to see that our government is corrupt and that it does not win elections but rigs elections every time. We don’t need the French or Americans to tell us that Mugabe is too old or that his government is corrupt and incompetent. We don’t need anyone to tell us that our country is under the rule of the worst despot in the world. Its high level of madness and arrogance for any leader to suggest that the protests in Zimbabwe are under foreign influence. People need food, people need jobs not anti-colonial rhetoric.
by Johnny Forthright
(Johnny is a Zimbabwean political activist who has been exiled by Mugabe’s government. He can be contacted by email – [email protected])
For more information and video’s please visit:
http://www.johnnyf.co.za/2016/07/14/mugabe-must-go-demonstration-pretoria-cbd-union-building-zim-embassy-wednesday-14-july-2016/
http://www.johnnyf.co.za/2016/07/14/mugabe-must-go-demonstration-pretoria-cbd-union-building-zim-embassy-wednesday–14-july-2016/