Reflections on the day that Zimbabweâ€™s #ThisFlag initiator, Pastor Evan Mawarire, was tried in court and released to a crowd of jubilant supporters and the media while a large contingent of baton-carrying police stood by

These photographs were taken by student photographer Jan-Dirk Visagie in Harare on July 13, 2016.Â  Words by a Zimbabwean correspondent.

It was the day of the second stay-away in Zimbabwe, Wednesday July 13, 2016 and we were all following events at the Rotten Row Magistatesâ€™ Court in Harare through WhatsApp messages from a lawyer friend who was inside the court.

Pastor Evan Mawarire, initiator of the social media campaign, #ThisFlag, which has taken the country by storm, had been arrested the previous day and charged with inciting public violence.Â Â  However, everyone knew that he had only called for peaceful protest in the face of the rapidly escalating economic crisis, widespread starvation, joblessness and the desperation of ordinary citizens.

As the day went on, Jan-Dirk and I felt we should travel to Harare to support the pastor, even if just to swell the number of his supporters.

Fortunately we only had to negotiate four roadblocks on our way in. As we drove to the court, passing an increasingly heavy police presence, we noticed the car next to us with a young driver shaking out a folded Zimbabwean flag to hang out of his window. We caught each other’s eyes and broke into huge grins.

Our mood was dampened considerably though as we drove into the small road leading to the magistratesâ€™ court and found it lined with armed police vehicles and what looked like water cannon trucks. As we drove in slowly behind a prison van I wondered what we were getting ourselves into, there was no obvious way to get out fast if things turned ugly. We inched past the rows of armed riot police with their batons, helmets, shields and body armour, trying to find a parking among the hundreds of cars already there.

We shouldered our cameras, checked that we both had our cell phones and enough airtime, then realised our batteries weren’t fully charged. Â Travelling to Harare hadnâ€™t been on the dayâ€™s agenda!

We joined a small gathering of people on a mound with a view of the gate through which the prisoners enter and exit the court area. At that time everyone still seemed very nervous of the police and people were keeping their distance. We started taking photographs and went quite close. Our past experience with police personnel was to keep as far as possible from them and never point a camera in their direction. I kept cautioning Jan-Dirk and calling him back. My stomach was in a knot as he clicked away, finding the light of the setting sun on the visors of their helmets. 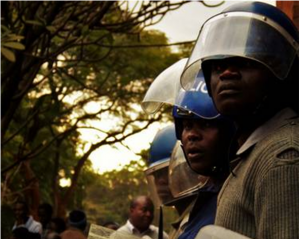 During the early July stayaway, social media was flooded with video footage of police brutality

A vendor walked past with small packets of new flags he was selling for US$5. My first Zimbabwe flag!Â  Since itâ€™s become a symbol of the regime, I never thought I would buy one, much less be proud to drape it over my shoulders. I would be glad of its added warmth later in the night. 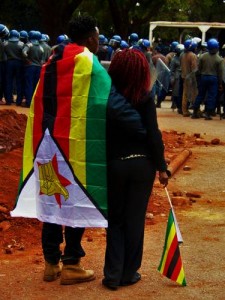 A movement at the gate brought the crowd surging forward and the riot police responded by closing ranks into a solid wall, restricting vision and access. The crowd pushed closer, determined to see if the pastor was being transported. A number of prisoners filed out, looked bewilderedly at the huge mass of people around them and then climbed into the waiting grey van with its tiny, claustrophobic windows.

No-one had seen the pastor, but everyone mistrusted the movements and underhandedness of the authorities. Every movement at any of the entrances brought a shout – and a wave of people would surge in that direction. There was a constant ebb and flow of the crowd around the court building. No-one would go in or out unnoticed. Jan-Dirk’s camera battery died and I handed him my camera.

Groups knelt in prayer under the leadership of pastors who also kept the people quiet and calm. The atmosphere was one of quiet vigilance, it was rather uncanny. The initial fear of the police had evaporated as people walked among them and wandered back and forth through the ranks, taking pictures and videos on the many smart phones in evidence, even stopping to talk on occasions. This is unheard of in Zimbabwe.

Knowing that the charges had been changed after the midday break â€“ from â€œinciting public violenceâ€ to the much more serious charge of â€œsubverting a constitutional governmentâ€ (i.e. treason) – we all were certain that the State had already decided the pastor’s fate and it was for them simply a matter of dealing with legalities or deferring judgement. 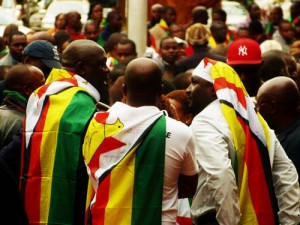 As darkness fell, the day watch changed guard for a new set of police. There was a murmur and surge among the crowd as the trucks departed and were replaced by others. No news had come yet and there was a strong feeling that they had snuck the pastor out with the previous guards. The fact that the Internet had been shut down for a few hours and the only communication was through mobile messaging increased the uneasiness and mistrust.

Our friends in the court room however messaged to say that Pastor Mawarire still had to appear for the final verdict of the magistrate, and both the magistrate and the pastor were still missing.

Well-wishers arrived with supplies of candles and blankets as the temperature fell and we waited in the unlighted surrounds of the court. Then the message came through to various phones that the crowd in the court was being led in a prayer as the magistrate still deliberated. The crowd outside on the steps also knelt again in prayer, one speaker followed another then a sporadic outbreak of song soared heavenwards in the candlelight. 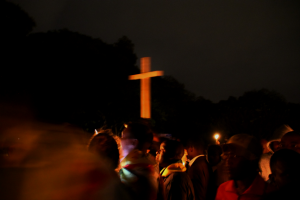 The huge crowd draws courage from prayers and the gentle, uplifting light of massed candles 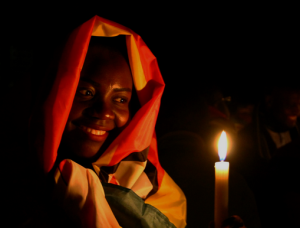 There was speculation the authorities were hoping that, by keeping everyone in the cold and dark, the crowd would go home, but the general consensus was a dogged determination to see it out. We had waited this long, we weren’t going home now! My phone battery died and we now had no way of communicating with our friends inside. Jan-Dirk suggested I put his battery into my phone but we couldn’t be separated as we would have no way of finding each other again in the crowd.

The minutes and hours dragged on as everyone waited patiently and prayed. If the pastor was going to be incarcerated there would be a crowd of witnesses, no unexplained disappearance this time!

Suddenly the police gathered together, some piling into the trucks, others jogging in lines, circling the outer edges of the crowd. It seemed at first we were being surrounded but the rest of police then took off to the waiting trucks in the distance. Uncertain but unafraid, the crowd began to chant in Shona “Police, don’t go!”

Confused I asked a lady next to me what was happening and she said “they are going, we are telling them stay, don’t go”. What a strange night this was. 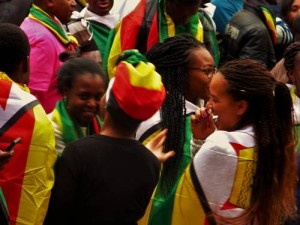 We were still milling about, wondering at the exit of the police when my phone, along with a number of others, beeped. There was a moment of stunned silence then an incredulous babble broke out. It wasn’t a shout, people couldn’t believe what they were hearing.Â  The case had been declared unconstitutional and was dismissed;Â  the pastor was free to go!

The crowd immediately surged to the court exit, I took shelter behind a tree as a mass stampeded past me, and Jan-Dirk disappeared along with them. At first he was ushered to the front as people saw him taking photos, but then he turned back and clambered up a tree, followed by several others eager for a better view.

Three shared his branch and from there he saw the lights of news crews focusing on a single moving nucleus as the crowd chanted, “Pastor, pastor!” Even from their vantage point it was difficult to see the pastor. It was jubilation, incredulity and grateful thanks to God for prayers answered beyond all expectation. 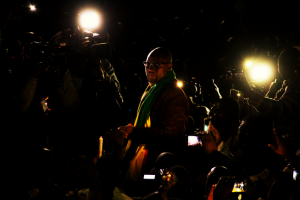 As Pastor Evan stood still to talk, the call went up, “Garai pasi, garai pasi” (Sit down everyone).Â  Those close by sat down and finally we could see him. The pastor looked bemused and almost overwhelmed as the crowd waited expectantly for him to say something. His talk was brief but the masses erupted in cheers at his closing words and he drove off to his freedom and his family. 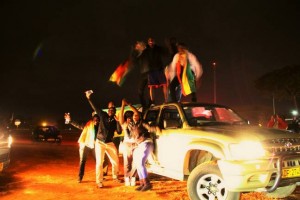 People were hugging their neighbours, in many cases complete strangers, dancing and taking â€œselfiesâ€. Flags were waving and horns were blaring as the entire area of the city around the court erupted in noise and celebration. Businessmen in suits were dancing on the roofs of their cars alongside jeans-clad youths.

The atmosphere surpassed that of a World Cup win, it was an exhausted, unbelievable jubilation. A friend compared it to the euphoria he had witnessed at the breaking down of the Berlin Wall in November 1989, just nine years after Robert Mugabe came to power.Â  At that point there was overwhelming hope for Zimbabweâ€™s future but he chose to turn on his people and destroy the country in his dogged quest for power and control.

As we celebrated together, we knew instinctively that this was a historic moment, more so for its unexpectedness.

A week later, we are a country on tenterhooks, unsure of what the future holds, and need to take courage from the passage of history.

In 1979, on the eve of Zimbabweâ€™s independence, renowned author and journalist Martin Meredith published a book entitled: The Past is Another Country: Rhodesia, 1890-1979.

Once again, the past is another country.Â  The day that Pastor Mawarire was freed, July 13, 2016, was a turning point for our battered and bruised citizens.Â  It was a victory for a brave pastor, a victory for overcoming fear, a victory for social media and most of all, a victory for the power of prayer.

One of the triggers for the collapse of the Berlin Wall â€“ which also caught much of the world by surprise – was that the economic system of the Soviet Union was breaking down, leading to an implosion.Â  Our economy is also on the brink of implosion and our corrupt, wrangling and inept government has no solutions to offer.

Like Mugabe and ZANU PF, the Berlin Wall and the Iron Curtain seemed to be permanent fixtures.Â  But the peaceful revolution that rippled across the continent throughout 1989 generated a political, moral, and spiritual earthquake that changed the course of history.

On a crisp winter night on the streets of Harare, our people joined together in unprecedented numbers to light the spark that will change the course of history. The future is in our hands 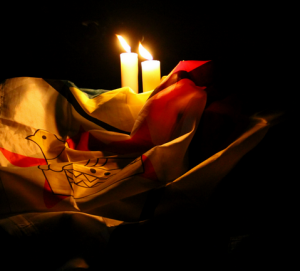