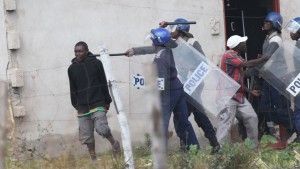 Business owners and local residents say this is an attempt to foil protests organized by arrested Pastor Evan Mawarire of #ThisFlag movement.A Supermarket owner in Mucheke high density suburbs, who only identified himself as Bla Godha, claimed that some security agents visited him last night and Wednesday morning and forced him to open his shop.â€œWhat happened this morning is that some police and some people who were ununiformed came to me and forced us to open the shops. So I was forced to call all my workers who had decided to stay at home, we are not happy with this we hope to participate as we are calling for the economy to be improved so that our businesses boom.â€

Another entrepreneur in the carpentry industrial site, who declined to be named in fear of victimization, said he was also forced to open his shop.

â€œAs a small scale business man who stays here in the light industrial area were shocked to be visited early by police officers and some men in plain clothes but this was against our will, we also wanted to be part of the protests so that our voices are heard.â€

Some workers like Tsitsi Guyo, who spoke to Studio 7, said their rights to protest were violated when they were called by their bosses to report for duty as they had heeded calls for the mass stay away.

â€œToday I came to work because my boss called me to report for work after I had stayed at home. I was told to come to work or Iose my job so I had no option but to go but this was against my wish.â€

â€œWe have indeed received reports from various parts of the province especially Masvingo city that state security agents and Zanu PF apparatus moved around yesterday and this morning forcing people to do business, there apparently unsettled by last week successful protests. We as MHRT condemn these blatant disregards of the constitutionally guaranteed rights of the people to demonstrate, we urge the authorities to respect the peopleâ€™s rights.â€