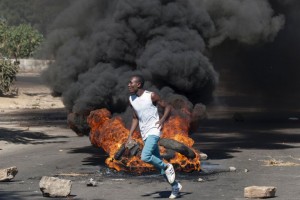 No longer scared to speak out against Robert Mugabeâ€™s decades-long oppressive rule, people have been taking to the streets.

The battered economy means banks have run short of cash, government salaries have not been paid andÂ basic imports have been banned.

Added to that there is a severe drought at the moment leaving millions hungry and the 92-year-old presidentâ€™s health is increasingly uncertain.

â€˜People are beginning to ask who the source of their problems is. The anger is mounting,â€™ Rushweat Mukundu, a political analyst with the Harare-based Zimbabwe Democracy Institute think-tank said.

â€˜The spontaneous acts we are witnessing now may escalate into mass uprisings.â€™

A national â€˜shutdownâ€™ strike closed many businesses, shops and schools last week, with public transport and some government departments and courts also ceasing to function.

â€˜The spontaneous acts we are witnessing now may escalate into mass uprisings.â€™

A national â€˜shutdownâ€™ strike closed many businesses, shops and schools last week, with public transport and some government departments and courts also ceasing to function.

The strike followed days of sporadic protests triggered by a sudden outbreak of demonstrations on the outskirts of Harare over police road blocks accused of extorting cash from motorists.

That unrest, in which at least 113 people were arrested, started on a small scale among public minibus drivers but soon spread, with rocks thrown at police and tyres burnt in roads as unemployed young men joined in.

The riots revealed the long-bubbling frustration normally kept under strict control by Mugabeâ€™s ruthless security forces in a country where 90 percent of the population are not in formal jobs.

A few days earlier, around 70 people were arrested in the town of Beitbridge at the border with South Africa during protests over a ban on imports of commodities such as canned vegetables, powdered milk and cooking oil.

â€˜Civil servants who were loyal to the government because they were getting salaries or using state infrastructure to engage in petty corruption are now among the discontented,â€™ said Mukundu.

Even the police and army â€“ essential to Mugabe maintaining power â€“ have been affected, with both forces paid about 12 days late last month.

â€˜As things stand, there is no capacity to address the crisis,â€™ Ibbo Mandaza, head of the regional think-tank Southern Africa Political and Economic Series, told AFP.

â€˜Nothing short of political and economic reforms will stop the crisis. It will continue like this until the end comes.â€™

But Mugabe has proved a tough survivor since coming to power when the country won independence in 1980, and he is expected to fight to retain his grip on the country.

His rule has been defined by antagonism towards the West, and authorities have accused unnamed â€˜Western embassiesâ€™ of sponsoring groups organising the protests.

One target of that jibe is thought to be the #ThisFlag internet movement, which has grown rapidly as Zimbabweans have embraced social media as a relatively safe and open way to express their opposition to Mugabe.

ThisFlag founder Evan Mawarire, a Baptist pastor, shot to instant fame after he posted a video of himself on Facebook venting against state corruption and the governmentâ€™s failure to provide basic services.

Now the hashtag has become a unifying symbol for the various strands of protest, and Mawarire has suggested another national shutdown next week.

The government is desperately seeking an IMF loan, but international donors are wary of support that could prolong the regime rather than encourage reform.

Zimbabwe, which abandoned its own currency in favour of US dollars in 2009 to end hyperinflation, spends more than 80 percent of its revenue on state workersâ€™ wages and is rated among the most corrupt nations worldwide.

â€˜Security forces have reacted heavy-handedly (to protests), including beatings and arbitrary detentions of activists,â€™ Robert Besseling, head of EXX Africa risk intelligence, said in a note.

â€˜A military coup or other form of political intervention is increasingly likely.â€™