In the wake of social unrest in my home country, Zimbabwe, there has been a unanimous agreement among many that the social unrest was bound to eventually happen. Such a script is based on history the world over, the latest being the Arab spring1. 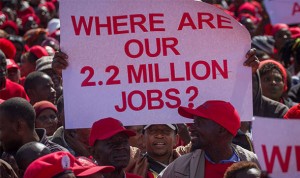 However, the official position in Harare and possibly in Pretoria seems to favour the â€œthird forceâ€ theory. State Security minister Kembo Mohadi said â€œfrom the way the demonstrations were carried out, it points to the hand of a third partyâ€.2 Home Affairs minister Ignatius Chombo claimed the US ambassador Harry Thomas Jr and his French counterpart Laurent Delahousse helped engineer protests in Harare and Bulawayo.2 ANC secretary-general Gwede Mantashe believes Zimbabweans participating in the “shut down” is the operation of a third force trying to effect regime change.3

I agree that there is definitely a third force in all this and I thought I am one small part of the third force. When you look at social media from those in the country to those who are, like me, in the diaspora, it is clear that people are terribly unhappy with their government. A lot of us even believe that the current government is on the steering wheel through unscrupulous means. Everyone who is affected by the activities of the current government is in a way a mini third force. The reason for such a third force is summed up in a question that Nompumelelo Runji asks; â€œâ€¦ can Zimbabwe be stable when poverty is grinding, when the economy is failing, when the state fails to pay the salaries even of the armed forces and police, and bans imports in a country that relies on imports to feed, house and clothe its people?â€3

I grew up in Chipinge where we thought President Mugabe always side-lined us. I went to Jersey secondary school where I went through a work and learn program where my routine, for the first term for example, was working up around 04:00 to go to work and knock off from work at 13:30 for classes at 14:30 till 20:30. I did this to get myself a chance to finish school with a chance to pass. I passed enough to go to ‘A’ level and beyond that to UZ. Just as I finished the coveted degree the economy was in tartars and a decent income from a working class job became a could have been that never became. Frustrated, I skipped the country into South Africa. This is a story that is repeated at least 30 0004 times every year since 2004 the time I left; institutions of higher learning churning out graduates onto the streets. If pre-tertiary schools are included the number that is released onto the streets could be around 300Â 000 yearly5. The unemployment rate is now hovering around 95%6.

From the above numbers it is reasonable to think that about a million able bodied young people are loitering in the dusty streets of our towns with their degrees and diplomas and nothing to gainfully do. A few who have jobs are not paid for months on end; I have a young brother in exactly this situation. This is a huge number of disenfranchised people who are excluded from the economy and have nothing to lose amidst the extravagance of the ruling elites. Surely this is a third force, a loaded third force at that. Pastor Evans Mawarire captures the pain we all feel whether at home or in the diaspora. His posts among numerous others now common have helped break our fear and galvanised us around the idea that we have to stand up for ourselves now.

If whole ministers in the mould of Dr. Ignatious Morgan Chombo and Mr. Kembo Dugish Campbell Mohadi cannot fathom this, we can ask, â€œis this malice on their part or incompetence?â€ As Robert J. Hanlon said â€œNever ascribe to malice that which is adequately explained by incompetence.â€