Zimbabweans United for Democracy (ZUNDE) supports the Peopleâ€™s mass action in their heroic resistance to Mugabe-induced suffering. We call for more of such mass action. We know the source of all our problems and also what needs to be done to free ourselves from suffering. We agree with all our people, especially the youth, that itâ€™s now time to demand our freedom. We are not free simply because Mugabe is oppressing us, but because we are too scared to claim our freedom back. 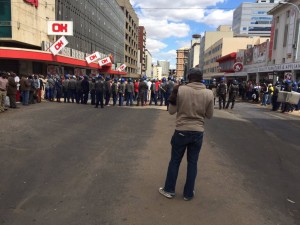 To us the mass action was a success. The people have made a statement to the government and opposition. They have drawn a line against Robert Mugabe and have in the same action awakened the opposition who seem to be taking too long in boardrooms.Â  We now know that Mugabe listens to nothing less than dramatic and decisive. As the opposition we must learn to put people first ahead of personal interests, preferences or ideologies. Left without a shepherd, the people remain vulnerable. Itâ€™s a mystery to many just why we canâ€™t unite, especially when we all preach unity!
ZUNDE will embrace all opportunities for unity among opposition parties. In this engagement we have not excluded anyone and have not preferred any above the others but have treated all genuine opposition parties as equal brothers and sisters. We know what is required; not just votes but pressure is now necessary. We acknowledge that we have gone so far but still very far. The time for talking without action is over. The people are ready so leaders must be. We bring additional ammunition and options into the strategy kit that can make Mugabe quake in his boots.
At ZUNDE we support the coalition imperative to support one candidate in every contested position in the 2018 elections. As President of ZUNDE I participate in coalitions fully accepting that someone else could be chosen to lead us. I would rather be an ordinary citizen in a prosperous Zimbabwe than be President of a collapsed Zimbabwe.
Josiah Tongogara is more admired than Mugabe because he did not destroy Zimbabwe but gave his life to build Zimbabwe. Mugabe is President but is responsible for all the misery we are facing, including the more than 20 000 innocent Gukurahundi victims, the 2008 madness and all the graves of millions of Zimbabweans who died prematurely because of Mugabeâ€™s destruction of our health and other public services delivery systems. I would rather be Tongogara than Robert Mugabe. Zimbabwe is bleeding to death and Robert Mugabe is holding the bloody knife! He is responsible for every single bleeding wound inflicted on our country, economy, agriculture, health and morality.
We have openly acknowledged the heroic efforts of all those that went before us. We salute the great efforts done by the general movement for democratic change led notably by figures like Joshua Nkomo, Edgar Tekere, Margarete Dongo, Morgan Tsvangirai, Tendai Biti, Welshman Ncube, Elton Mangoma, Joyce Mujuru, and lately Pastor Mawarire. We are actively participating in NERA currently chaired by Mr Didmus Mutasa of ZimPF and Coalition of Democrats currently chaired by Mr Gilbert Dzikiti of DARE. Our wish is that we further consolidate and combine these and other efforts including ZiNAP led by Bishop Magaya. What a force to reckon with should brothers and sisters unite! We will always have differences but unity is priceless.
Recently we held our National Executive Council (NEC) meeting in Harare and resolved to structure our team to succeed. We resolved that our troops must convene and report for duty on the ground in Zimbabwe. We remain indebted to the vast majority in the diaspora who support our cause and in many cases are prepared to help materially. The time for internet and website activism is now over. Those that are ready have reported for duty except for three or so who remain quaking in their boots offering different excuses for their unpreparedness to join the trenches. Our troops are now on the ground and we will march with the willing. Itâ€™s not unusual for some to be scared but letâ€™s allow those who are ready to proceed and not seek to hinder or sabotage their progress.
ZUNDE is a holy ancestral philosophy that we donâ€™t hold exclusively. We hold it in trust until the rest of the opposition movement is united against Mugabe. To the nation we give ZUNDE as a platform to work together to achieve genuine change in Zimbabwe. ZUNDE is a grassroots led movement as opposed to elitist movements managed from internet, boardrooms and laptops. We are on the ground in Zimbabwe and there is where you find us. We are not far over the horizons or seas, our people know us and have shaken hands with us and recognise our voices.
For all that they have done to us; we have no more nice words for Mugabe and his accomplices. We no longer consider them rehabilitable or part of any progressive future. Mugabe is the enemy of progress and the author of our misery, poverty and misfortune. Â We urge those who are genuinely Zimbabwean sons of the soil and liberators to abandon Mugabe and join the people. The police must drop the teargas canisters and join the people. Our security forces must never point their guns at the people they swore to protect. I can guarantee them a good sleep at the end of the day!
To the people of Zimbabwe we urge that we unite and prepare for the battle for our lives. Foreign oppressors are easier to shack off, but being oppressed by your own, itâ€™s a bloody battle. It was easier to fight Ian Smith but to remove Zanu PF dictatorship we will give more than our lives.
Whatever it will take, letâ€™s remain united, selfless and focused. Now that the masses have shown us the way; we must all report for duty next time a national call for action is made.
Thank you all
Farai Mbira
ZUNDE President
Post published in: Featured