Politics is a game of numbers. As such, small, weak and poorly-funded political parties will almost invariably find it an impossible feat to win an election; even if such an election is free and fair. The political landscape in Zimbabwe is rather unique and peculiar because we have a political party, Zanu PF, that has conflated the distinction between the party and the State. 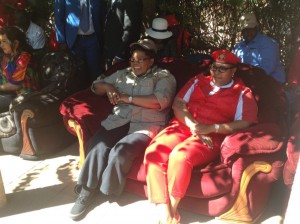 In more ways than one, Zanu PF as a conventional political party no longer exists. What we have is the State apparatus that has effectively taken over the space that used to be traditionally occupied by Zanu PF as a political party. As a political party, Zanu PF is hopelessly weak, dis-united and deeply factionalised. Thus, the State apparatus ie the Army, the Police, the Air Force, the intelligence services, the civil service etc have de facto taken over the role of running the affairs of Zanu PF.

Ever since the coming on board of the massively popular labour-based Movement for Democratic Change in 1999, elections in Zimbabwe have been routinely rigged. The rigging machinery went into overdrive on July 31, 2013 when even some Zanu PF Parliamentary candidates were totally surprised how they had managed to win in certain constituencies that are traditionally MDC strongholds. A classic case in point is the Mt. Pleasant constituency in suburban Harare; with only two wards both of which are wholly middle class. The electoral rigging of July 31, 2013 was masterminded by the State apparatus led by the Central Intelligence Organisation. Zanu PF, as a political party, played a very minimal and inconsequential role in the massive rigging exercise.

As currently constituted, there is a snowballâ€™s chance in hell that the Zimbabwe Electoral Commission (ZEC),will be able to conduct a free and fair election in 2018.The ZEC secretariat is packed with very high level CIO operatives who take their instructions not from the Zimbabwe Electoral Commissioners but from some shadowy and extremely powerful characters based at Munhumutapa Building, Chaminuka Building and the State House. This, therefore, speaks to the urgent need for having a powerful coalition of opposition political parties to take Zanu PF head on in Election 2018.The formation of strong political coalitions is like running in a marathon and not in a sprint event. Of course, there is need for a very careful and delicate political due diligence exercise to be conducted before a coalition is formally launched. The Zanu PF regime, weak and fragmented as it might appear to be, has got its tentacles in every facet of life in Zimbabwe; be it in business, the church, sport etc. Opposition political parties should be wary of a disintegrating and collapsing Zanu PF. The collapsing political edifice called Zanu PF is like a wounded buffalo. It is at its most dangerous and lethal phase and indeed; the last kicks of a dying horse are always fatal.

The Movement for Democratic Change led by Morgan Tsvangirai is arguably Zimbabweâ€™s most popular and largest political party in terms of membership. Love him or hate him, Morgan Tsvangirai still packs an extremely powerful political punch. He is charismatic and hugely popular amongst ordinary Zimbabweans in both the urban and rural areas. The new kid on the block, Zimbabwe People First led by Joice Mujuru can never be taken lightly. Mujuru has got very solid liberation struggle credentials in her own right. Apparently, her partyÂ  seems to enjoy considerable support in the rural Mashonaland region consisting of Mashonalnd East, West and Central. It goes without saying that a political coalition between Morgan Tsvangiraiâ€™s MDC and Joice Mujuruâ€™s Zimbabwe People First will give the faction-ridden Zanu PF party a very good run for its money in Election 2018. The people of Zimbabwe have suffered for too long under the Zanu PF dictatorship that has perfected the â€˜â€™artâ€™â€™ of looting, corruption and misgovernance. Zimbabweans are desperate for meaningful and positive democratic change. The national economy is comatose and the level of poverty amongst the majority of Zimbabweans is depressing to say the least.

Let me hasten to add that a big chunk of the war veterans group is deeply disappointed by the way in which the bankrupt and faction-ridden Zanu PF regime has been treating them of late. It is highly likely that these disgruntled war veterans will never, ever vote for Robert Mugabe and his collapsing Zanu PF party in any election. War veterans have since realised that they were just being used and abused by Robert Mugabe as he continues to play his usual divide and rule brand of politics. They desperately want out of Zanu PF.

Just like in a business partnership, people donâ€™t necessarily have to be personal friends in order for them to work together in a viable and strong political coalition. Political coalition partners donâ€™t have to be in love with each other in order for them to work together for a common political goal. You simply have to share the same broad political objectives and in our context, the main task at hand is to ensure that the insipidly corrupt and dysfunctional Zanu PF regime is send packing in Election 2018.

The story of political coalitions in Kenya makes a very interesting case study. The Jubilee Alliance is a multi-party coalition that was established to support the joint Presidential elections ticket of Uhuru Kenyatta and William Ruto in the 2013 Kenya general elections. At the time of the election, its members were The National Aliance, the National Rainbow Coalition, the United Republican Party, United Democratic Front and the Republican Congress. Most readers will recall that Uhuru Kenyatta and William Ruto were, at one time, extremely bitter and acrimonious political rivals. But today, Uhuru Kenyatta is the President of Kenya and William Ruto is his Vice President.

Anyone who thinks that Zanu PF, weak and fragmented as it might appear to be, will be easily defeated in Election 2018,certainly needs to have their head examined. There is a compelling need for the formation of a strong political coalition against Zanu PF or else the majority of Zimbabweans will be shocked by the outcome of the next general elections. This is the time to build a strong and formidable coalition against the Zanu PF dictatorship. Politicians should simply learn to completely discard their big, fat and selfish personal egos.

Obert Gutu is the MDC national spokesperson and he is also a practising corporate lawyer in Harare. He writes this opinion piece in personal capacity.