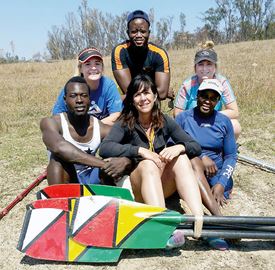 Cool Runnings was loosely based on the story of the four Jamaican bobsledders who qualified for the 1988 Winter Olympics in Calgary, Alta. The 1993 comedy was well-received by audiences, and Davisâ€™s proposed flick, a Murphyâ€™s Law comedy of errors, will be a must-see for those high on â€œdramaâ€, according to Davis.

The tale of the African rowing team will be on the air Sept. 9 to 11 when the quintet â€“ Previous Wiri, Michelle Garnett, Margret Bangajena and Takudzwa Gwariro, along with able-bodied coxswain, Davisâ€™s daughter, Jessica â€“ hit the water in Rio, hopefully.

Thereâ€™s really no telling how the movie will end at this point, but the story has been crazy from the beginning.

With some Quentin Tarantino influenced sequencing, itâ€™s necessary to go back in time before the opening scene in February, when the transplanted Cambridge native got the call from FISA with the idea to start a para-rowing team.

Prior to that, she was coaching Olympian Micheen Thornycroft, but they â€œamicablyâ€ split when they felt Thornycroft had reached her limit with just Davisâ€™s personal coaching. The decision was for her to train with the South African team, where she could be pushed by their national team athletes and guided by a large staff.

Her history with Thornycroft is what precipitated the call from FISA.

Â â€œI was left with all this free time on my hands. Unfortunately, when people know that about me they give me challenges,â€ Davis said on the phone from Zimbabwe.

The challenge was to get a para-rowing team ready for a regatta in April in Italy. That was two months away. At the end of the regatta was the last qualifications for the Paralympic Games.

There was one little problem though.

â€œThey are very much hidden in this country. People with disabilities, to say that they are marginalized doesn’t even put a stamp on it. Youâ€™ll struggle to find a handicapped parking spot. Youâ€™ll never find a washroom stall or a ramp going into a restaurant, or anything like that.â€

So Davis put a call out on social media asking any physically handicapped people, or anyone who knew disabled people to contact them, and to come to her school for a chance to row.

To her surprise, 18 people showed up for the meeting. She figured she would only get two or three to maybe take a couple of single scull rowers. Not surprising was that many of them really didnâ€™t know what rowing was, and some were even afraid of the water. They were just happy that someone wanted to do something with the disabled, she said.

Then she basically had to explain the rowing concept and take everyone through what was happening â€“ if they can swim, maybe they can row, then maybe they can go to race in Italy, and maybe race for an Paralympic spot.

Before she could do anything, she needed a doctor for physical examinations and physiotherapists to determine the potential rowersâ€™ range of motion. Just by happenstance, two physiotherapists showed up at the meeting looking to see if they could help the team for â€œOlympic trialsâ€.

Though trials talk hadnâ€™t even entered the equation, Davis brought them onboard. A parent of a child she taught, who was a doctor not currently practicing, volunteered her time for free.

â€œAll these doors opened. As soon as I started the project, as soon as I thought I canâ€™t do this, something would happen,â€ she said, noting also the team needed money and received a donation, and one of her rowers was given a passport in 48 hours even though she didnâ€™t have a birth certificate.

Once she got her rowers, Davis was told that accreditation and accommodations would be taken care of in Italy, they just had to get there.

At first they were refused VISAs into Italy, so they went to the Italian embassy. The VISAs were granted, but the machines went down before things could be formalized and they didnâ€™t receive their VISAs until they day before departure.

â€œIt was overwhelming, exciting and a little bit frightening all at the same time.â€

Once in Italy, Davis figured that was the end of the drama. Not even close.

Besides having to find buckets of cold water for her rowers to bathe with â€“ it was what they were used to â€“ Chipo Zhento, who was on the team in Italy, suffered a seizure. After being examined, doctors decided that because she wasnâ€™t on any medication to control the seizures, and since a prior record of seizures wasnâ€™t disclosed, she couldnâ€™t compete.

The head doctor, who had worked for a short time in Cameroon, overruled the decision. The doctor realized the family most likely didn’t tell Zhento she was suffering from seizures â€“ not revealing a handicap to explain for her loss of time â€“ and it would bring shame on the family if the team was unable to compete because of her.

Cleared to race, the team finished second-last, beating only Japan.

Davis figured that was the end of the chance for the team to get to the Paralympics, but she was wrong. A month after returning home, she found out the rowers were granted a â€œbi-partheidâ€ card for the Paralympics.

Fulfilling the requirements of gender equality and improving in only two months of existence, the Zimbabwe team was considered for the Paralympic pass because they were a country developing the sport. It was also the only African nation â€“ besides South Africa, which was no longer considered developing â€“ to compete.

Then, Davis found out she was down a rower. Zhanta suffered another stroke when they got home and her family believed it was because she was possessed. With that, and no medication to keep the â€œpossessionâ€ in check, there was no way she could go to the Paralympics.

Davis was told she could get a replacement, but they would have to race internationally before the Paralympics. The last World Cup race was in Poland in a week.

Not only did she find Garnett just days before the deadline for Poland â€“ despite the fact Garnettâ€™s father was at an earlier meeting where Davis called out for another rower and he said nothing â€“ but also fundraised for the travel costs.

â€œWe were well out of our league, but I have to take it to these guys. Not only did they have the disabilities, they had to get through so much more to get on that plane â€“ theyâ€™d never left Africa before, let alone stay in a hotel.â€

With their Paralympic spot solidified, Davis had many more things to deal with, including the families of some of her rowers. Thereâ€™s jealousy from family members who want to know why they are going away but not bringing any money back.

â€œYouâ€™re whole idea about athletes and training for the Olympics, and itâ€™s all about going to the Olympics, that doesnâ€™t apply here for most of my crew,â€ she said.

â€œThey do it because their families in some communities figure thereâ€™s going to be some payback. Itâ€™s been a real lesson in cultural exchange. As a coach Iâ€™ve had to completely change my mindset. When one of my athletes says my momâ€™s sick and I have to go to the village, you can’t say no. Rowing is not the primary thing on their list of things to do. Itâ€™s almost like when they come they’re doing me in favour. This is a luxury for them.

â€œIf thereâ€™s no money in the wallet for a dollar bus fare to come, then they wonâ€™t come unless I pick them up. They can live 40 minutes away out in the bushes, in the rural areas.â€

The one thing that has gone their way is the water on the dam where they train has gone down, so the crocodiles have been removed. But, Murphyâ€™s Law again, political strife has cooled their training. People were asked to stay off the roads and indoors. This past week, one of Davisâ€™s rowers had to hide in a box to get away from the police during riots.

Not training as much as she would like is probably a blessing for her rowers. Davis has conceded that she canâ€™t push them too hard, as they’re not elite athletes, and doesnâ€™t want them injured before the Games.

That is, of course, if they get there. They are supposed to depart on Aug. 31 and the Zimbabwe sports organization has yet to book them a flight. If they do make it, Italy has a boat they shipped to Rio for them to use to compete, and Davis raised $4,000 to get them new uniforms from RegattaSports in St. Catharines.

They used hand-me-downs from other rowers in Italy and Poland.

â€œIf we get to the start line it will be a minor miracle,â€ she said, still laughing at the craziness of the journey.

â€œWeâ€™re in the hands of our sport governing body and anything thatâ€™s government-run is unpredictable at best. Itâ€™s going to be last-minute.

â€œWeâ€™re told we’re going and weâ€™ve accepted the bi-partheid card, so to not go now would be a huge country humiliation and our countryâ€™s not into that. Our government is too proud for that, so I have every confidence that we will definitely be there. I just have to wait.â€

So, right now, her movie doesnâ€™t have an end. But Davis is sure whoâ€™ll play her part.