ZIMBABWEâ€™S ageing despot Robert Mugabe is losing his grip on power over teachers, nurses and the military who have propped him up over five decades live in poverty. 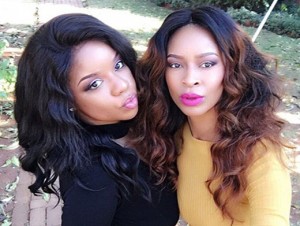 But for two Instagram loving sisters, the country’s troubles are a world away from their luxury lifestyles.

Dubbed Zimbabwe’s Kardashians thanks to their pouting, selfie obsession, Vanessa and MichelleÂ are the daughters of flamboyant property mogul and politician Philip Chiyangwa, a ‘nephew’ of Mugabe, who is reportedly worth $281million.

But despite her father’s wealth and high connections, Vanessa Chironga insists she lives a â€œhumbleâ€ life in the capital Harare.

While the country is the poorest it has been in 20 years and violent protests are held against Mugabe on the streets, the 29-year-old is overseeing the construction of a new house in an exclusive suburb with four bedrooms, two bars, and an infinity pool with her new husband, Tanaka.

They scaled back their recent wedding in the Seychelles to $65,000. Â Gushing over her intimate ceremony of 50 guests, she said:Â â€œIt was actually a low cost weddingâ€.

â€œWe had a destination wedding because we were trying to avoid the 9,000 people that would come if we had a traditional one in Zimbabwe,â€ she said – admitting that the traditional wedding would of course have to include her father’s ‘uncle’, President Mugabe.

The couple are now planning a ‘budget’ honeymoon to Cancun, Thailand or Bali, next month after overspending on the ceremony paying for their guests’ alcohol.

But Zimbabwe’s troubles where poverty-stricken protesters are taking to the streets to rally against Mugabe are not lost on Vanessa.

And she cites the state of the country’s roads as the reason Vanessa and her new husband only have two cars each.

â€œCurrently I only have two [cars] to be honest, with the potholes and the road surface the amount of stuff you have to do to your car is ridiculous,â€ she told MailOnline.

â€œWhen I was given my first car [by my dad] I cried forever â€“ it was a Chrysler Crossfire â€“ and it was the first one in Zimbabwe for about eight years, so whenever I drove around I was like ‘Oh my god!’

Despite her lavish, oh-so Instagrammable lifestyle of hotels, cocktails and extravagant shopping trips, Vanessa insists she earned everything she owns.

â€œEverything I’ve got now I worked hard for myself,â€ she declared.

â€œI worked for my dad three years, but after that there’s no trust fund for me.â€

Vanessa used to run a lingerie and sex toy business after spotting a gap in the market on her return from a decade in the UK.

Her firm targeted woman looking to stay loyal to their travelling husbands, but was soon scrapped after questions were raised over its questionable Christian morals.

She now runs a skincare brand aimed at clearing up adult acne, as well as a daycare centre for Harare’s miniature elites.

Her younger sister Michelle, who lists herself simply as ‘Boss’ on LinkedIn, runs a hair salon from a plush Harare suburb Bluffhill. She sells luxury wigs online for $260.

The 27-year-old entrepreneur â€“ whose name doesn’t appear publicly listed on the car rental and her father’s property businesses she claims to run â€“ says she studied acting at Canterbury Christ Church University in the UK.

Self-branded ‘Lady MC-Boss Lady’ posts pouting selfies, and gushing pictures of her luxurious lifestyle including a bed laden with Gucci bags tagged ‘Feels like Christmas’ and a shiny black Jeep with the personalised number plate ‘BLESSED 1’.

The women have built a reputation in their home country where they are tagged ‘The Kardashian sistersâ€™ while their country crumbles.

The girls appear to be unfazed by the difficulties faced by their father Philip’s uncle President Mugabe as he launches a vicious crackdown on former allies who have turned against him.

The 92-year-old’s desperate attempt to cling to power is causing tension as the country teeters on the brink.

Former freedom fighters who have turned on the tyrant after four decades of loyalty, are being rounded up by police and jailed for their ‘traitorous’ disloyalty.

Despite Vanessa’s family links to Mugabe, she has not held back from criticising the dictator’s party’sÂ anti-white agenda.

â€œJust letting all the white people know I’m requesting your friendships so that I seduce you into coming back to Zimbabwe,â€ she wrote on Facebook.

â€œWait, is seduce the right term!!! Well maybe not but if it works why no, so come back and help us rebuild this country,â€ she added.

Vanessa’s words caused a stir in Harare, but she backed them up, saying her â€œwhite bloodâ€ on her mother’s side qualified her comments, and admitted that perhaps she reveals â€œtoo muchâ€ about her personal life on Facebook.

â€œLook at how the country was 20 years ago,â€ she said. â€œI know in some cases people felt enslaved I don’t know and that’s why they were so against it, but I don’t look at colour â€“ I look at shades of grey.

â€œWe have just come back from [a decade] in the UK and we thought the government had been getting better and now we’re at a time where it’s getting worse.

â€œSo my frustrations were taken out of the fact that I don’t want to be living in a country where there are too many uncertainties.

â€œWhen I made my comments I wanted to know how it used to be when there were white people in the country,â€ she said.

This article is taken from the MailOnline (UK).