A community peace club (CPC), Mutonhori peace club that has been established by a community that works with Heal Zimbabwe in Zaka ward 22 has intensified its peace building initiatives in the area. On 11 August 2016, the CPC mobilized community members for a collaborative neutral platform (nhimbe) where they were carrying pit sand required for a school block construction at Muchokwa Primary school. 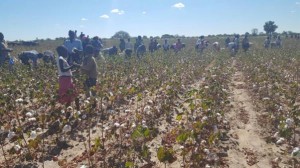 The nhimbe was attended by Ward Councillor, Mr. Jeketa, Â Headman Mutonhori and seven other Village heads. The collaborative platform was part of the peace clubâ€™s action plan after it successfully carried out a conflict mapping exercise earlier in the month of July. During the mapping exercise, the CPC noted that there was need to engage more duty bearers and rights holders in the activities of the peace club in order to spread the message of peace and social cohesion. The nhimbe afforded villagers an opportunity to interface with their local leaders on pertinent issues that affect development and threaten peace in the area.

At the nhimbe, Ward Councillor, Jeketa noted that in the past, violence had stalled development as there was no spirit of unity and oneness among community members. â€œ…In the past, it has been difficult to work together because people had become enemies of each other but its encouraging that Mutonhori peace club has been initiating peace initiatives in the area. We should never allow violence to happen in our area again,â€ he said. Community members present also vowed to continue cultivating a culture of tolerance as this is key for the promotion of peace and development in the area. The nhimbe was attended by 150 community members.

Nhimbes are one among many activities being implemented by community peace clubs to rebuild community relations and social cohesion with a niche to prevent violence.