The MDC Youth Assembly condemns in the strongest of terms the brutal and arbitrary force used by the police as they descended on citizens who were exercising their democratic and constitutional right to demonstrate under the banner of Tajamuka/Sesijikile campaign. 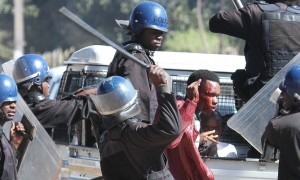 Amongst the injured in today’s protest was the Assembly’s Secretary General, Lovemore Chinoputsa and Harare Province driver Mr Jemwa. We view this as a declaration of war and we will not take this brutality lightly.

This only goes to show the level of desperation on the part of Robert Mugabe regiment. We will not sit back while the citizenry is harassed willy-nilly. As an assembly, we call upon the people of Zimbabwe to rise up and face this regime head on. We therefore are warning individual police officersÂ  to desist from being used as tools oppression.