Crisis in Zimbabwe Coalition condemns I the strongest sense, the high levels of brutality shown by the Zimbabwe Republic Police (ZRP) today, August 3, 2016. 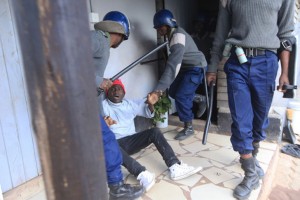 The police used force to disperse a group of protestors whose march had been cleared by the High Court on August 2, 2016.

The protestors were marching against the proposed introduction of bond notes and high levels of unemployment in the country.

Several protestors were injured as a result of the police brutality while riot police officers patrolled the Central Business District victimizing innocent civilians.

As CIZC, we are concerned that the law enforcement agents have become the biggest violators of the constitution which they are supposed to uphold.

We are alarmed as CIZC that the police would resort to the use of force to crush peaceful and lawful protests by unarmed civilians.

The behavior exhibited by the police today stems from partisan conduct that has seen the police force defying court orders in a bid to protect the interests of the ruling party, Zanu (PF).

We are further concerned that the police brutality comes at a time President Robert Mugabe has warned to implement stern measures against any form of protest in the country.

As CIZC, we are on record that the Presidentâ€™s remarks have the potential to fuel violence and hatred against dissenting voices as well as human rights abuses in the country.

Since the Presidentâ€™s stern warning to civic society groups as well as the church community, the police have upped the gear in blocking peaceful protests by disgruntled Zimbabweans and the result has been a series of human rights abuses in the form of arbitrary arrests as well as torture of protestors.

CIZC implores the Head of State and Government, President Robert Mugabe to listen to the concerns of poverty stricken Zimbabweans as the use of force can only serve to further worsen the already dire situation in the country.

Citizens have a constitutional right to protest and as such, it is obligatory for the government to uphold this fundamental right.

As CIZC, we stand in solidarity with disgruntled Zimbabweans and call upon law enforcement agents to desist from using force against unarmed and innocent civilians.