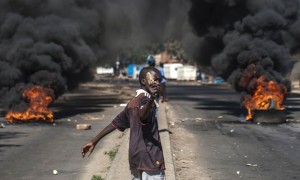 A protester throws rocks next to burning tyres during a demonstration against President Robert Mugabe. Photograph: STRINGER/AFP/Getty Images

Mubaiwa and Thabani Maseko who were arrested in Luveve and charged with Public Violence and contravening section 36 (1) (a) of the Criminal Law (Codification and Reform) Act [Chapter 9:23] Â were acquitted at the close of the States case.
This comes after four Bulawayo residents who were arrested over a â€œMUGABE MUST GOâ€ rant during the stay away protest where acquitted by Magistrate Tawanda Muchemwa on Tuesday 2 August 2016. In Beitbridge, Magistrate Gloria Takundwa granted $100 bail to Morgan Ncube, a former councillor in the border town, who was arrested on Wednesday 03 August 2016 and charged with committing public violence.

Prosecutors claimed that Ncube committed public violence when he participated in a protest held in the border town against the imposition of an import ban on some basic commodities.

Ncube was remanded out of custody to 22 August 2016 for trial together with other Beitbridge residents. Ncube’s arrest brings to 31 the number of people arrested for allegedly taking part in the demonstration staged at the Beitbridge border post.