The National Association of Youth Organizations (NAYO-Africa), an umbrella association of 184 youth organisations in Zimbabwe notes with concern the negative events unfolding in our beloved Zimbabwe, with young people being mostly at the receiving end. 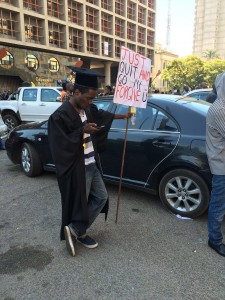 NAYO notes with concern the level of crisis in the country; the growing deterioration on the economic, social, cultural and political spheres.

NAYO implores the government on behalf of youths to be cognisant of the socio-economic and political challenges faced by the country, which need urgent attention â€“ youth currently face the biggest brunt of unemployment in Zimbabwe, educated and qualified yet without decent jobs. Youths owing to the youth bulge have increasingly become disempowered and disengaged in national processes and are thus manipulated and exploited given their vulnerability. Youth unemployment has reached catastrophic levels with estimates at 90% – universities across the country continue to channel graduates onto the streets with no prospects of decent employment. We note with concern the unfulfilled electoral promise by our government to provide 2, 2 million jobs.

NAYO condemns in the strongest terms the recent wave of police brutality, gross violations of constitutional rights of citizens and the increasing intimidation targeted at activists, church leaders and citizens participating in various movements. In different parts of the country, citizens have been arrested most of whom are youth for exercising their constitutional rights, this including juveniles. Police have responded to peaceful, non-violent and constitutional protests with force, brutality and impunity with the purpose of injecting fear in the citizenry and silencing them.

We have witnessed children being tear-gassed, the selective application of the law and arbitrary mass targeting of youths in communities such as Epworth in a blitz to instil fear in the citizenry.

NAYO noted with sadness the recent events in which government property being distributed along partisan lines, the recent allocation of Stands to only ZANU PF youth (a section of youth) will not only act further to divide the already divided society; but also it will further reduce the level of confidence by young people to the body polity that is charge of our political affairs, with selective application of development being exercised, a worrying phenomenon that needs to be condemned in totality. This act goes against Section 20 of Zimbabwe Constitution which points the need for government programs towards youth; to be nonpartisan and national in character.

NAYO strongly calls upon our government to uphold the Constitutional values and respect Human Dignity. In particular to;

NAYO calls upon the President of the Republic Mr. RG Mugabe to dialogue with youth on the current national crisis, as a people together; we can find solutions to a potentially failed state.

Government must take drastic measures to address the many challenges faced in the country. We remain resolute in our role and work for youth in Zimbabwe, guided by our constitution.