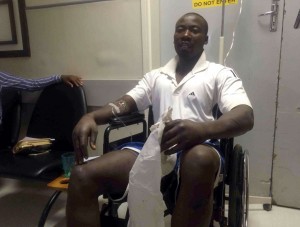 The abductors were driving two unmarked twin cab vehicles and three unmarked Toyota Chaser vehicles. During the abduction some traders on site attempted to assist him when he shouted for help, but his abductors fired shots into the air, deterring them from helping him.

Kudakwashe was blindfolded and driven to an unknown destination in Mazowe, where he was subjected to severe beatings, torture using electrical shocks and injected with an unknown substance. During the torture and interrogation his abductors demanded to know the residential addresses of NAVUZ Chairperson Stern Zvorwadza and committee member Kauzani.

When he passed out and the abductors thought he was dead, they left him. On revival Kudakwashe, who had been left stark naked, sought help from homesteads in farms along the Old Mazowe Road. Members of NAVUZ collected him from Mazowe and facilitated his access to medical assistance. Prior to his abduction the vendorsâ€™ warehouse where he was supposed to be guarding, was torched by unknown assailants around 12.00 pm on Monday the 26th.