The MDC, as a social democratic political party that has always identified with the plight of the poor and down â€“ trodden of society, is deeply concerned and indeed, extremely saddened by the Zanu PF regimeâ€™s stubborn insistence on introducing the use of bond notes later next month. John Mangudya, the Reserve Bank of Zimbabwe Governor, in his monetary statement that was published a few days ago, openly admitted that Zimbabweâ€™s financial health is very depressing and disturbing. 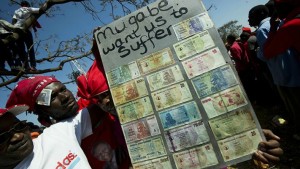 Against all financial and economic logic, the Zanu PF regime has decided to introduce bond notes into the financial system. No rocket science is needed to appreciate the fact that the introduction of bond notes will wreck havoc with our economy. It is a notorious fact that Zimbabwe is importing not less than 75% of all its industrial, manufacturing, agricultural and food requirements. This effectively means that we are a net importer of goods; including food such as our staple food, maize meal. In order for the country to import food and other essential goods, we badly need hard currency. Bond notes are not hard currency.

Bond notes will certainly cause untold suffering amongst the majority of the people of Zimbabwe. As a political party with the interests of the people at heart, the MDC would like to call upon the Zanu PF regime to call off the introduction of bond notes into our financial system. These worthless bond notes will inevitably lead to increased shortages of essential goods in the country simply because most, if not all, importers, will not have access to the hard currency that is needed in the import and export of goods and services. We strongly suspect that the bankrupt and faction â€“ ridden Zanu PF regime harbours a very sinister motive pertaining to the introduction of bond notes.

The majority of the people of Zimbabwe, on whose behalf the MDC is speaking, have already stated, resoundingly, that they donâ€™t want these bond notes to be introduced into the financial system. If it is indeed true that the bond notes are backed by a US$200 million facility provided by the Afri â€“Exim bank, the Zanu PF regime could simply release this amount of money into the market rather than rushing to print worthless bond notes that they say will initially be equivalent in value to US$75 million. The Zanu PF regime can never be trusted with financial prudence and probity. This regime has got an extremely bad record and history of spending more money than the value of goods and services that Zimbabwe can produce.

The MDC is saying a resounding NO, to the introduction of bond notes. The people of Zimbabwe shouldnâ€™t continue to be abused and mistreated by the renegade and irresponsible Zanu PF regime.