The people of Zimbabwe should not delegate their fight against socio-economic challenges they are currently going through but should instead carry their own cross and fight the Zanu PF regime, President Tendai Biti has urged. 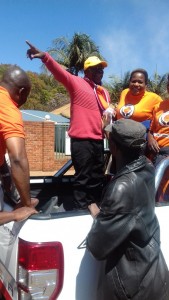 President Biti made the call on Sunday while addressing a PDP district rally in Epworth, Harare on Sunday adding that it was constitutional for the people to hold peaceful demonstrations against the Zanu PF government.

â€œWe have no guns but a constitutional right to go into the streetsâ€.

President Biti denounced Mugabe for attacking the judges on Saturday.

â€œAs PDP our solution to this economic and political breakdown is simple â€“ let us put pressure on the government through the courts, churches and streets because it is the future of our children and grandchildren at stake,â€ he said.

The PDP leader said it was shocking that Mugabe could attend events such as the SADC summit and claim to be the President of Zimbabwe when the country is facing numerous challenges and people are dying from curable diseases such as diabetes.

â€œHow can you go to SADC and claim to be the President of Zimbabwe when 91% of the people are unemployed, 79% are using the bush toilet system.Â  I donâ€™t wish for the death of Mugabe but I want him to live and witness change and see that the development of Zimbabwe is possible.

â€œZanu PF has failed.Â  You can rig anything but you cannot rig the economy.Â  There is no fiscal discipline.Â  Here, Epworth is like a refugee camp, Mbare and Hatcliffe are like war ravaged towns.Â  In Rwanda, you will not find a water well but it is a country that lost 1 million people in 1996.Â  It is a country that has been led by people with love for the country and its people.

â€œA government that is feared by the people is not a government.Â  The government should fear the people,â€ said President Biti.

He called on all democratic parties to come together and demand electoral reforms before the next elections.

â€œThat is why on Saturday we as the PDP were in Bindura attending the ZimPF rally.Â  As political parties we need to demand for the use of a BVR (biometric votersâ€™ roll) in the next elections that are 20 months away,â€ he said.

He said politics of slogans were no longer a necessity as people expected an elected government to deliver on their promises.

â€œIn 2013, Zanu PF promised 2, 2 million jobs but now they have killed 2 million jobs. Â We do not want politics of slogans that is why we have HOPE as one of our policy documents,â€ he said.

Meanwhile, President Biti has urged all party supporters to attend the partyâ€™s first anniversary celebrations to be held at the White City Arena in Bulawayo on Sunday, 11 September 2016.

â€œLet us build the PDP.Â  All roads on 11 September, 2016 lead to the White City.Â  We are a fresh, young party with ideas.Â  Because of the hunger in Zimbabwe, this will not be removed by slogans but ideas.Â  Our goal is not only to remove Mugabe but to remove a system of patronage and corruption.

He said the PDP was pleased that the National Transitional Authority (NTA) had been embraced by Zimbabweans.

â€œWe see that the factions in Zanu PF want us to engage in a war.Â  So the NTA says that if we do not want war, letâ€™s have a transition to save the country from bloodshed.

â€œThe idea is to create a soft landing for the Zimbabwean crisis. It is our idea of buying peace and sustainability, let support it.Â  Change is in the air.Â  You can smell it,â€ he said.