The next time you find yourself in the unenviable position discussing geopolitics and world finances, you may want to mention Zimbabwe and how its currency was at one point more powerful than the US dollar. This bold statement will undoubtedly silence the crowd for a moment, and may even register some remarks about you being a liar, but it is an absolute truth. In 1980, the African nation of Zimbabwe gained Independence from Britain and reveled in a fairly healthy economy. And yes, the Zimbabwean Dollar was indeed stronger than the American Dollar at this point in time, for several years actually. Then the decline began. 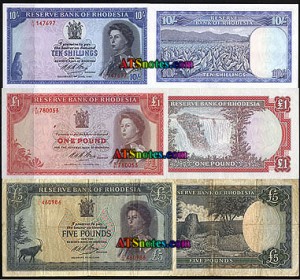 Political turmoil surrounding the instability of President Robert Mugabeâ€™s government hit the country hard in the early 90s.Â  The economy turned south soon after.Â  Land reforms, questionable financial practices and widespread corruption plunged the country into massive inflation.Â  Double digit and even triple digit inflation is not uncommon for a developing nation that is finding its feet in the world stage.Â  However, no one can deny the ridiculousness of the situation when Zimbabweâ€™s inflation topped out at a whopping 231,150,888% in July 2008.Â  Real world pricing increased 100% every day in November of 2008.Â  A chewing gum worth a penny on the 1st of November would have cost $10.7 million at the end of the month, a figure that is both laughable and tragic.

As mentioned the countryâ€™s financial practices were highly suspect, and aside from the shady backroom deals being made, this cannot be more evident in their printing of money.Â  Zimbabwe was really good at printing money.Â  So good in fact, that it seemed to be the solution for almost every problem the country faced.Â  The markets are taking, print money.Â  The Chinese have come to collect on debts, print money.Â  Food is scarce, print money.Â  People are starving, print money.Â  Needless to say, this only made things worse.Â  By the end of a dismal 2008 people were walking around in the streets with 100 trillion dollar notes in their pockets and trading them in for bread.Â  Bona fide trillionaires were having a hard time to make ends meet.Â  The scene of post-war Russia where citizens were bringing wheelbarrows of cash to buy a loaf of bread comes to mind.Â  In typical fashion, the government decided it needed a change and so printed more money, new money in fact.Â  The order went out to create a new series of banknotes, one with less zeroes.Â  The people, the market and the world, eventually had enough and the Zimbabwean dollar was summarily abandoned.

2009 was definitely the lowest point in Zimbabweâ€™s financial history.Â  It was around this time, that western technology developers soon started eyeing African countries like Zimbabwe, this time for its minerals.Â  Zimbabwe it seems is sitting on a rather large repository of minerals that are in large demand for the production of a host of products and materials, not the least of which is smartphones.Â  For a while there it looked like Zimbabwe would have its time in the light again and be able to claw its way back to financial solvency.Â  Companies and nations were lining up and pitching bids in the order of tens of millions of dollars to access land and resources.Â  Things were looking up, or so Zimbabweans thought.

Rampant corruption and misappropriation of funds quickly depleted the nationâ€™s coffers.Â  Unable to generate its own money, the government of Zimbabwe resorted to borrowing money from other nations and global companies, often the same ones that would have been paying them money to extract minerals.Â  The nationâ€™s economy did see a significant increase due to the heavy lending, however it is a temporary celebration at best.Â  In 2013, the countryâ€™s offshore debts were to the tune of $7 billion (USD) leading many nations which first came to its aid to seriously reconsider their support.Â  Countries like the U.S., U.K. and several EU countries have already halted financial and food aid – leaving not just the government to suffer, but the people of Zimbabwe as well.Â  Even countries like China who are usually not afraid to play the â€œlong gameâ€ are starting to lose their patience and believe that investing in Zimbabwe may not have been a good idea after all.

The sad truth is that Zimbabwe is literally sitting on a veritable gold mine of resources.Â  Coveted by nations willing to pay top dollar for access, these minerals can be Zimbabweâ€™s shot at salvation.Â  But, the sadder truth is that in its current state Zimbabwe does not have the infrastructure in place to realize its goals.Â  Zimbabweans are ready, the businesses are ready, the foreign investors wait with hands gripped tightly on pens and cheque books, but what is evidently sorely lacking is the correct leadership to properly usher in the change needed to breathe life into this African nation.

This essay is written by https://writemyessays.com online essay helper.