Launched in August this year, Zimbabwe Yadzoka/Mayibuye iZimbabwe campaign seeks to educate and mobilize Zimbabweâ€™s rural populace over the need to get rid of the Zanu (PF) regime. 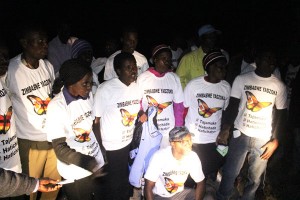 Q: In brief tell us about the Zimbabwe Yadzoka campaign; its aims and objectives.

A: Zimbabwe Yadzoka is a subaltern movement, targeting the marginalized communities and populations with a specific purpose of listening to their voices and ensuring that these voices are part of the national political discourse. Rural populations in Zimbabwe have been misinformed or uninformed on current issues and developments in the country, therefore Zimbabwe Yadzoka bridges this gap by ensuring that current information reaches these populations. There is great potential that rural populations if well engaged and mobilized, they can define new politics in Zimbabwe.

Rural areas have up to 70 % of our population, and in these areas there is rampant electoral fraud, violence and intimidation. So our voting patterns tell you that we need to concentrate more in these areas.

Q: Given the Zanu (PF) culture of violence especially in rural areas, how do you intend to penetrate these areas?

A: We use a number of ways to reach these rural communities taking note of the violent and brutal nature of Mugabeâ€™s regime. Firstly, our main method is distributing flyers; we have flyers which summarizes the current challenges in Zimbabwe. These flyers are in vernacular languages, such as Shona, Ndebele, Kalanga, Tonga, Venda, among others officially recognized by our constitution.

Secondly we do some night vigils and these are done under the cover of darkness to protect the locals participating in these meetings. Thirdly, Zimbabwe Yadzoka uses any chance of gatherings in areas we visit such as at funerals, church services, in fact as long as we reach the people our objectives are met.

Q: Most rural areas have often been described as Zanu (PF) strongholds and don’t you think that will be a big challenge for you?

A: We are already penetrating these rural areas, so it is no longer a big challenge but we are just cautious for the safety of the locals. Itâ€™s a fallacy now to consider that ZANU-PF still has strongholds. The whole country has an insatiable appetite for change now.

The party is imploding and we are taking advantage of that.

A: People are ready to fight for their dignity and birthright. Itâ€™s sad the majority has been reduced to paupers and worse still those parents in the rural areas have heavily invested in the education of their children, wishing that in future their children would get employment, but itâ€™s nothing, itâ€™s a sad thing. What is more painful is that this is done to these people by the so called liberators. ZANU-PF really has to be careful because if they repeat that spate of violence the whole country will erupt. You donâ€™t need the old nutty professor to tell you this, itâ€™s written everywhere.

Q: Intimidation and manipulation of voters in rural areas have often been described as being behind Zanu (PF’s) victory in rural areas and how do you intend to counter that?

A: The part we are playing in this struggle is small but critical in this struggle. We as Zimbabwe Yadzoka/Mayibuye iZimbabwe we canâ€™t offer solutions to this, I believe NERA for example is in much better position to really push for electoral reforms. Political institutions have more clout than us in this regard but we are doing mainly two things about it. Firstly, we are educating these rural populations on basic voting rights and what it entails to counteract the propaganda by ZANU-PF. We have even heard stories that some people were scared to vote for a candidate of their choice because they are cameras everywhere in the voting booth and/or polling station. So we try to deconstruct these fallacies. Secondly we are urging people to be ready to defend their vote should it be stolen. There has been a lot of indecisiveness and probably lack of leadership in between voting and results, and this time we want people to be in the streets, growth points, polling stations waiting to defend their votes.

Q: Your message is Mugabe must go. So are you working with other progressive forces in the country?

A: Mugabe must go mantra is only but just one of our main issues we push for. Even after Mugabe, is soon, 93 by the way there is still a lot of work when it comes to the rights of the marginalized which are trampled upon in this country. On your second point, yes we work with all progressive forces, individuals and organizations who we share some commons values but more importantly a love for our country. Our closest allies are the people of Zimbabwe and other social movements pursuing same goals as us, for example Occupy Africa Unity Square, Tajamuka, ThisFlag, among many.

Q: How do you view the efforts of social movements that are being launched around the country to dislodge Mugabe from power?

A: I think there is a vacuum which these movements are filling in, but more importantly most of these social movements like us are non-political and fight for the lumpen proletariat, for the peasant, for the vendor, so in short we are all fighting for a new Zimbabwe but more importantly for the little guy in the street and this is something that transcends party politics and a good thing for the future of our country.

Q: Do you think your efforts will bear fruit without electoral reforms?

A: Electoral reforms are very important and NERA has a huge task ahead of them, on that we ask them to lead and we follow because as political parties they are the ones in the business of votes and still better placed to navigate that train. But letâ€™s remember ZANU-PF have been losing and not gaining votes, and if at one point Mugabe conceded defeat to Tsvangirai what about in a scenario where all and everything, including the kitchen and the sink are thrown at Mugabe. Look we have a beautiful opportunity here, Zimbabwe Yadzoka as penetrating the rural areas as never before, additional we are pushing a sub-campaign for millennials dubbed Zvimakire ZAMA VHOTA/ decide your fate by voting. The millennials presents another good opportunity for us and can show us a clear path to victory, all we need to do is that they are assisted to register and/or encouraged to register for voting depending on circumstances. This demographic is un/under-registered and yet a significant proportion of our population. To answer in short, we need reforms but if people vote Mugabe resoundingly out, it could be very difficult to rig such an election, given that the people will be waiting in streets already for their victory, therefore our message to the people is that Zimbabwe Yadzoka, what we are just waiting for celebration, but for this to come to pass we all need to do our small part for the future of our children, for own dignity and for the love of our country.