New York- The MDC USA, in conjunction with members of #thisflag movement will be embarking on weeklong demonstrations at the United Nations grounds in New York on Saturday, September 17th to the 22nd, to register ourextreme outrage at the socio-political and economic injusticesperpetrated against Zimbabwe citizens by a dispassionate ZANU PF regime. 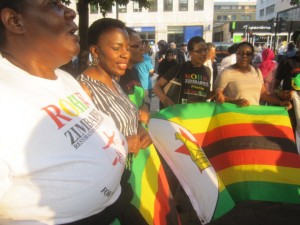 In recent weeks and months, we have witnessed in horror, the militarized ZANU pf thugs masquerading as law enforcement savagely brutalizing peaceful citizens who took to the streets to constitutionally express their concerns to those who are misgoverning them. Â We were further shocked at the reckless comments made by president Robert Mugabe recently in regards to judicial discretion which is clearly in contravention of the principle of the separation and independence of the arms of state. Below is a list of our demands:

1. We call upon the ZANU PF government to stop the forcible abduction and brutal torture of opposition supporters

2. We demand that the ZANU PF regime stop the distribution of food relief support on partisan lines

3. We are justifiably irritated at the ZANU PF Â government’s reluctance in implementing electoral reforms before the next plebiscite a. We therefore demand that the government embark on an exercise to

a. We therefore demand that the government embark on an exercise to establish a biometric register before next election

b. At the same time, we call upon the government to extend voting rights to the disenfranchised penal population as per the African Charter on Human Rights

c. And not only that, we call upon the ZANU PF government Â to establish a non-partisan and independent electoral body

d. We demand that the Zimbabwe security forces must not play any role in any election

4. We call upon the United Nations to set up a commission of inquiry that will look into the events and circumstances that led to the forcible disappearance of political activist Itai Dzamara

5. Furthermore, we call upon ZANU PF regime to bring to book all perpetrators of political-motivated crimes

6. We urge the International Criminal Court to investigate and indict individuals in the ZANU PF government for crimes against humanity7. We call upon the Zimbabwe Republic Police to adopt a ‘soft’

7. We call upon the Zimbabwe Republic Police to adopt a ‘soft’ approach by engaging citizens rather than resorting to heavy-handedness tactics

8. We call upon the release of ALL political prisoners from Robert Gabriel’s jails

9. We call upon the government to curb the rampant corruption

10. Last but not least, we demand the voting rights to be extended to Zimbabwe citizens living abroad. Finally the MDC USA external assembly wants to make it clear that our demands are non-negotiable and that Robert Gabriel Mugabe and his corrupt and purchasable minions can ignore our demands at their own peril.