AILING president Robert Mugabe is on his last legs â€“ and will leave his country in ruins when he goes. That's the analysis of one Africa expert, who revealed the utter state the ageing Zimbabwean tyrant is in. 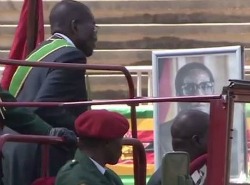 Once the breadbasket of Africa, his country is now racked with debt and erupting with the biggest protests in years.

His government is so bankrupt that it’s delayed paying its numerous employees â€“ a salary bill which costs 97% of its income.

While the despot himself, aged 92, is dogged by rumours of ill health, despite pledging to run for re-election in 2018.

Mugabe was this month said to be dead after abandoning a summit of African nations, apparently to seek treatment.

Now the country’s cash-strapped central bank says it will print new ‘bond notes’ to get the markets moving.

But it’s feared the notes will quickly become worthless and plunge Zimbabwe back into hyperinflation.

The last time that happened, the Zimbabwean dollar became so worthless it was available as a $100trillion note.

It’s this combination of elements that means “this crisis is different” says Africa-based journalist Geoffrey York.

Writing for Canadaâ€™s Globe and Mail, he said unemployment in Zimbabwe had hit 90% and most industries had closed.

He described how the government couldn’t get IMF funds without paying back a staggering $1.8billion in various loans.

And with Mugabe looking increasingly frail, even the members of his ruling Zanu PF party are battling each other.

“It is clear that Mugabeâ€™s capacities have diminished significantly,” he told a briefing this month.

“His ability to hold things together is doubtful. Heâ€™s not providing much glue.”

Police are trying to crack down on the growing protests, but the demonstrations continue. 18 opposition parties and organisations have formed an alliance and joined the protests.

Pigou said: “A certain amount of fear has diminished. What weâ€™ve seen in the past few weeks, we havenâ€™t seen for a long time.”