As the National Vendors Union of Zimbabwe (NAVUZ), we are deeply concerned over the continued abuse of desperate vendors in Harare as well as across the country. 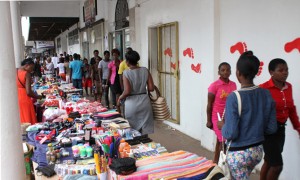 We have learnt with utter disbelief that the Harare Municipality has engaged the services of the riot police who are assisting them during their raids on vendors in the Central Business District (CBD).

Given the brutality that has been shown by the riot police over the last months, we are convinced that the government, which is solely responsible for the economic meltdown in the country, has launched a warfare against innocent and unarmed vendors trying to make a living in a failed economy.

NAVUZ has over the past days recorded several cases of abuse of vendors by riot police who have also taken these raids as an opportunity to loot goods from vendors as some of the confiscated goods were never recovered by their rightful owners.

We condemn in the strongest sense the continued militarization of Zimbabwe.

On numerous occasions, NAVUZ has tried to engage government so as to come up with a sustainable solution to the issue of vending but government has totally failed to listen to our concerns as shown by their move to unleash riot police on vendors in Harareâ€™s Central Business District.

Government has shown a complete disregard for citizensâ€™ socio-economic rights and also its indifference to the plight of poverty stricken Zimbabweans through its move to turn brutal at a time the country is faced with an economic meltdown that is threatening the livelihoods of millions of Zimbabweans.

Political bigwigs continue to loot national resources for personal aggrandizement while the majority wallow in abject poverty and the suffering of ordinary Zimbabweans has been worsened by the fact that government has introduced a raft of measures that have worsened the plight of Zimbabweans who have turned to the informal sector as a result of high levels of unemployment.

As NAVUZ, we shall continue to fight against tyranny until the government learns to respect peopleâ€™s fundamental rights and freedoms.

The move by the government to unleash riot police on vendors cannot go unchallenged and we will be intensifying our protests against the Zimbabwe Republic Police (ZRP) and the Harare Municipality.

We also call upon the Zimbabwe Human Rights Commission (ZHRC) as well as the Parliament of Zimbabwe to investigate the abuse of vendors by the Zimbabwe Republic Police (ZRP).

NO AMOUNT OF FORCE CAN STOP US NOW.