The Peopleâ€™s Democratic Party (PDP) would like to thank the courts for upholding the Constitution and ordering the immediate release of human rights defender, Linda Masarira. 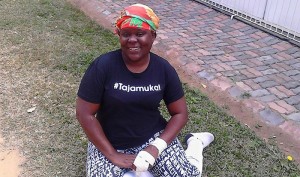 Masarira was arrested in June this year and has since then been denied bail on several occasions at the magistrateâ€™s courts.Â  While in detention, she was held in solitary confinement at the notorious male section of Chikurubi Maximum Security Prison.

Her continued incarceration and denial of bail was a total abuse of the Constitution by the state.Â  For over three months, Masarira was denied her freedom while her young children were living without the support of their mother because of a ruthless regime.

The abuse of the Constitution by the state was also further exposed today by High Court judge, Justice David Mangota who in granting Linda bail, expressed his anger on the illegality of her arrest, her illegal detention in prison and that the police were out of order.

As the PDP we are pleased in that the courts remain brave and continue to uphold the Constitution despite unjustified threats by Zanu PFâ€™s Robert Mugabe.

We also thank lawyers, Andrew Makoni and PDP President Tendai Biti for taking the matter to the High Court and ensure that Linda got her freedom.