on persecution of political activists 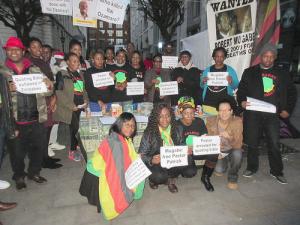 Our petition about the persecution of political activists in Zimbabwe has gone live on the UK Parliament petitions page. As long as you are resident in the UK you can sign it. PleaseÂ Â log in and sign it andÂ circulate as widely as possible. Please could you. Many thanks.

Petition: RAISE ISSUE OF PERSECUTION OF POLITICAL ACTIVISTS WITH MUGABE REGIME IN ZIMBABWE

We ask the UK govt to raise the issue of persecution of activists with the Zimbabwe govt. The last election was hugely rigged. Misgovernance & corruption have destroyed the economy resulting in starvation & 90% unemployment. Civil unrest is growing & protestersrefused bail & jailed without trial.

Linda Masarira, locked up since 6 July on trumped-up charges, has health problems & is the mother of 5 children (youngest 2 yrs). Accused of inciting riots in the female section of Chikurubi prison on 10/9, she was moved to solitary confinement in the dangerous malesection â€“ we fear for her safety. Other activists are also still incarcerated, many needing medical care after violent treatment by the police. Both Gift Sizibaâ€™s hands are believed to be broken. This vicious persecution must stop.