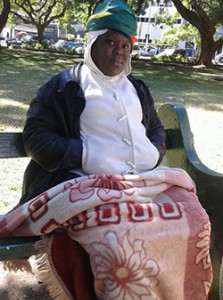 Masariraâ€™s lawyers Andrew Makoni and Obey Shava, who are Zimbabwe Lawyers for Human Rights (ZLHR) members petitioned the High Court on Wednesday 21 September 2016 seeking a habeas corpus order, which is an order requiring the detained person to be released or to be brought before the court for the lawfulness of the detention to be justified and the detention to be declared illegal and ordering the detained personâ€™s prompt release.

Masarira, who is currently detained at Chikurubi Female Prison after she was denied bail on 09 July 2016 at Mbare Magistrates Court, was arrested on 06 July 2016 and charged with contravening Section 38 of the Criminal Law (Codification and Reform) Act Chapter 9:23 for allegedly obstructing or endangering free movements of persons or vehicles during the #ShutdownZim2016 anti-government protests.

The pro-democracy campaigner was denied bail on the basis that she was on an outstanding warrant of arrest in another matter of which she is appearing at Mutare Magistrates Court, while nine of her co-accused persons who are currently on trial with her were all granted bail.

The warrant of arrest was issued on 06 June 2016 after Masarira failed to attend court proceedingsÂ  at Mutare Magistrates Court as she was admitted in hospital after she was arrested and assaulted on 04 June 2016 during a protest held in Harare, where she dislocated her finger among other injuries. The human rights campaigner was only released from hospital on 07 June 2016.

In the urgent chamber application, where Home Affairs Minister Ignatius Chombo, Justice, Legal and Parliamentary Affairs Minister Emmerson Mnangagwa, Zimbabwe Republic Police Commissioner-General Augustine Chihuri, Zimbabwe Prisons and Correctional Services (ZPCS)Â  Commissioner-General Paradzai Zimondi and the Officer In Charge of Mutare Central Police Stationâ€™s Law and Order Section, Masariraâ€™s lawyers argue that the warrant of arrest was issued when she was in hospital hence she was not in wilful default of which the warrant of arrest could have been cancelled had she not been in hospital and allowed to travel to Mutare Magistrates Court for the default inquiry.

In Mutare, Masarira has a pending case.

Makoni and Shava argue that as soon as the respondents were aware that her detention on account of the warrant of arrest had commenced, they ought to have brought her to court within 48 hours for the default inquiry failing which she ought to have been released.

Makoni and Shava, who argue that Masariraâ€™s liberty has been deprived arbitrarily and without just cause and that her continued detention is a gross injustice, want the High Court to issue an order for the release of the pro-democracy campaigner and to compel the Clerk of Court at Mutare Magistrates Court to issue a warrant of liberation for her in the pending case at Mutare Magistrates Court in which she was charged with disorderly conduct.