On the 4th of May 2016, the Reserve Bank announced that they were going to start printing and issuing a new local currency that they would call â€œBond Notesâ€. Clearly they were working on the new notes being an extension of the â€œBond Coinsâ€ that had been in circulation for some time and were now accepted currency at par with the US dollars in circulation. 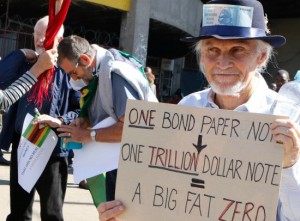 Reaction was swift â€“ the IMF concluded that the liquidity crisis was much worse than was being stated by the authorities and they did not fully understand the reasons why this was the case. The general public reacted with horror and it was widely predicted that the new currency would be rejected.

Cash is just a means of exchange and its value is determined by the monetary policies of the issuing authority and market forces. We use the US dollar and this has a stable value against other currencies and in fact, tends to be on the strong side of the monetary fence. It is printed by the US Central Bank and is made available for exchange purposes and as a store of wealth in all parts of the World. Today it is used in over 98 per cent of all local transactions in Zimbabwe and supplies 70 per cent of all the cash in global markets.

I always supported the issue of bond coins â€“ we needed them to help with local transactions and it was not viable to import US coinage with the same face value. I also felt that their total value at about $35 million would make little or no difference. Because they would be readily convertible into real US dollars at par, their value would be fixed by their larger brothers in the market. This proved to be the case and after a brief period of adjustment they were adopted by the markets as a means of exchange.

Bond notes are another matter, the consequential investigations of the IMF into the background to the decision has revealed that both the Ministry of Finance and the Reserve Bank have been delinquent in their administration of our fiscal and monetary affairs. This delinquency was so serious, that the Fund suspended further progress under the Staff Monitored Program and tightened up their monitoring of the situation in Zimbabwe.

There was little doubt; the regime in Harare had so depleted local foreign exchange reserves that they could no longer support the purchase of adequate volumes of US dollars to meet local demand. They had to print their own notes to meet the need for liquidity on local markets as supplies of real dollars on local markets tightened.

After delaying the introduction of the new currency twice, the Reserve Bank has now announced that they are going to float the bond notes in October. What will be the implications?

If you believe the Governor, and I do not think we can, then they are going to introduce the new notes in small quantities and small denominations ($2 and $5 notes). If they stick to this mandate then the exercise will make no difference â€“ like bond coins we will be able to bank them as US dollars and they will be reflected in our bank accounts as USD â€“ freely convertible. This is the essential test of value.

However, this will also mean that the problem they are meant to address â€“ the shortage of currency on local markets, will not be resolved. They will simply float in and out of local markets, be banked and that is it. If they follow their own rhetoric then the shortages of currency and our inability to withdraw our own money from our accounts will continue to be a problem and in fact might become worse.

I cannot see them following that route â€“ a source close to the Reserve Bank told me some time ago that they had printed $2,5 billion worth of local currency. That is the sort of money that would be needed to restore the free availability of cash in our markets and if they issued any sort of volume of the local notes to the market in an effort to restore the availability of cash, then the markets would react and devalue the notes. Various people I have spoken to are betting that the notes will devalue immediately and sell at a discount in the markets.

A more difficult problem would arise when the State attempted to pay the Civil Service in the new notes and the Service discovered that they either cannot use it for exchange or deposit them and get real money in return. The State is justifiably nervous of the reaction and in my view this would have the capacity to bring down the government.

But the reality is that they have been converting our hard earned money into worthless paper scrip for three years, more recently, in they have been funding the State by taking money from private accounts and replacing it with â€œplasticâ€ money. This has been exacerbated by the conversion of export proceeds into virtual money so that today up to $3 billion in our accounts is no longer there. It may be called US dollars, but itâ€™s not, it is a form of local currency that you cannot draw in foreign currency from an ATM or a bank or use for external payments. It is already â€œBond Notesâ€ and you did not know it!

So now we are now operating in a much smaller economy scripted by the availability of the Reserve Bank to supply foreign exchange â€“ taken illegally from exporterâ€™s accounts and allocated to Reserve Bank clients who have to ask for hard currency to pay for essential external supplies. This is about $2,4 billion a year compared to $6 billion a year in 2015. This means that our trade with South Africa is probably now down to a quarter of what it was last year â€“ and that could cost SA 200 000 jobs in industry.

It also means that local markets will either find themselves grappling with shortages or much higher prices forced by importers switching to smugglers for essential supplies. My wife went into a local Pharmacy for a supplement she is taking for cramp â€“ the price was $29 for a monthâ€™s supply â€“ last month it was $13 dollars.

So this Government is grappling with numerous problems â€“ all created by their refusal to follow simple macroeconomic rules. Printing bond notes is not the answer; no expert anywhere would advise it unless it is accompanied by widespread reform and macroeconomic stability. In present circumstances it will either be a non event or a spectacular disaster. Take your pick. I hope they go ahead full steam â€“ at least then we would not have to tolerate this sort of nonsense for much longer.

Born in 1933, Allister died this week in a Johannesburg Clinic. He started his working life as a Cub reporter on the Chronicle in Bulawayo. He then went on to become one of the most influential Editors of a major newspaper in South Africa under the Nationalist Party. Deeply respected by friends and foes alike, he consistently spoke into South African affairs with skill and deep understanding.

When he retired from being an active news paper editor he turned to writing a series of books on African affairs and this culminated in the recent publication of his own biography. He was a key player and observer of the transition from De Klerk to Mandela in South Africa and his book on the period has become a classic. In later life he turned to advising clients on South African affairs and was rated as the best political analyst in South Africa for some years.

We became good friends when on occasion the heat in South Africa became too great for him and he needed a safe house in Zimbabwe. He also often consulted me on Zimbabwean affairs whenever we threatened South African stability. I spoke to him just two weeks ago on just that subject.

He will be missed across the globe and especially in his beloved country, South Africa.