The National Vendors Union of Zimbabwe (NAVUZ) would like to distance itself from violent clashes that occurred in Harareâ€™s Central Business District today. 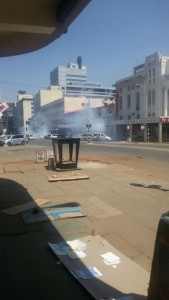 These Zanu (PF) youths were claiming to be angry vendors protesting against the government and shouting slogans such as â€œVendor Woyeeâ€ which are often used by NAVUZ members.

As NAVUZ, we view this as one of the ploys by Zanu (PF) to use their rogue youths to cause violence after which they will abuse their stranglehold on the police and judiciary to institute a series of arbitrary arrests of opposition and civic society activists.

We would like to reiterate that NAVUZ is a peaceful organization and violence has never been our way of resolving issues.

Rather, our members have been victims of police brutality while protesting peacefully and todayâ€™s violent scenes in the capital is one of the many ways through which the regime is seeking to punish our members as well as opposition activists.

History is laden with cases of civic society and opposition activists being arrested on trumped up charges and todayâ€™s events show that the State is at it again.

What is mind boggling is that the Zanu (PF) youths terrorized ordinary citizens while stoning buildings for more than an hour yet there was no police response.

To make matters worse, the NAVUZ offices were also stoned by the same rogue youths who were claiming to be vendors and belonging to NAVUZ.

During this melee which was being perpetrated by the Zanu (PF) militia, NAVUZ staff was stuck in their offices for fear of their lives.

NAVUZ would like to distance itself from such rogue behavior. We implore the ruling party to listen to our concerns rather than try to use dirty tactics to silence genuine grievances.