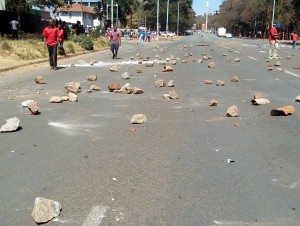 Magistrate Mbeure granted an application for refusal of remand that was filed by Lison Ncube and Lizwe Jamela of Zimbabwe Lawyers for Human Rights (ZLHR) representing the BUYA members Alfred Dzirutwe, Mthokozisi Ncube, Lenny Kuzvarwa, Lwandlolubanzi Ndebele and Plaxedes Mudenge, who challenged their placement on remand on the basis that prosecuting the Bulawayo residents would be a violation of their fundamental rights and tantamount to abusing the criminal justice system.

The five BUYA members were arrested by Zimbabwe Republic Police (ZRP) officers on 31 August 2016 and charged with criminal nuisance in contravention of Section 46 of the Criminal Law (Codification and Reform) Act for allegedly organising a demonstration and whistling and holding banners.

Prosecutors charged that Dzirutwe, Ncube, Kuzvarwa, Ndebele and Mudenge gathered at Large City Hall in Bulawayo on 31 August 2016, where they allegedly created public nuisance by â€œwhistling, making noise and being disorderly and also waved a banner inscribed â€œBUYA says no to corruption, No to bond notes, No to police brutality, #Sesikhatheleâ€.

Prosecutors also alleged that the five BUYA members had placards inscribed â€œNo to another teargas killing, an innocent life was lost,â€ and â€œCorrupt ministers must be arrested.â€

In their application Ncube and Jamela argued that the BUYA members acted within the confines of the law in exercising their constitutional rights as guaranteed in Section 58, 59 and 61 of the Constitution when they staged the protest in Bulawayo.

The human rights lawyers argued that the facts placed by the State before the Court were not adequate to justify the continued placement of the BUYA members on remand.

Ncube and Jamela said the outline of the State case which should contain the facts that the State seeks to prove, contained no facts that explain the charge as to why prosecutors concluded that the BUYA members contravened any law.

The human rights lawyers submitted that the actions complained of by the State against the BUYA members did not amount to an offence as they were clearly exercising their fundamental rights to association, expression and the right to demonstrate as guaranteed by Section 58, 59 and 61 of the Constitution.

Ncube and Jamela argued that for the State to charge their clients for allegedly displaying placards, a banner and whistling during the course of a public demonstration, where the ZRP was notified would amount to abuse of the criminal justice process as the alleged conduct is legally and constitutionally protected and as such no offence was committed at all.