The deplorable state of public healthcare in Zimbabwe shows how the government has abandoned its priorities in serving the people resulting in thousands people dying from curable diseases. 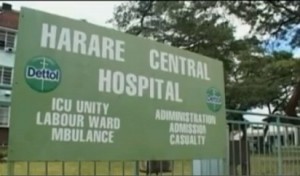 Public healthcare is now in the intensive care unit due to serious shortages of basic medical services and medicine such as aspirin and antibiotics.

Due to lack of government funding and support, Harare Central Hospital, a major referral centre, has announced the suspension of surgeries as it has run out of painkillers.

This shows how the government of the day has misplaced priorities.

The situation at Harare Central Hospital is a reflection of the dire state of health system in the country.Â  Other critical sectors are going through similar lean periods as the government has abandoned them.
The dreadful state of the health centres has resulted in unnecessarily loss of lives due to the failure of the Zanu PF administration to provide healthcare centres with basic medicine such as; antibiotics and pain relievers such as morphine.

It is sad to note that when 90% of hospitals and clinics are operating without essential medicines in stock while President Robert Mugabe, his family and senior government and Zanu PF officials regularly travel to Singapore and other countries for medical treatment.

When 80% of the posts for midwives remain vacant in the public sector, Mugabeâ€™s daughter, Bona, early this year travelled out of the country to give birth.

The sad reality is that infant babies and expectant mothers are dying due to lack of proper medical attention.Â  The situation is worse in the rural areas where the health centres are kilometres away from homesteads and there is a critical shortage of nurses and medicine.

With 90% of the population unemployed and only a third of the population on medical aid, most people are forced to seek medical attention at public health centres but unfortunately they are dying from diseases such as asthma, diabetes and hypertension because the government does not care.

It is clear that Mugabe cannot fix the plethora of crises that he causes. His administration has decided to abandon public health as a priority sector. The stateâ€™s obligation is to ensure accessible, affordable, acceptable, quality health services are equitably distributed amongst Zimbabweans.

Although antiretroviral (ARV) drugs are supplied for free at all public health institutions, there have been cases of shortages at most centres, seriously raising health concerns among those on treatment.

The government is failing to take cognisance of the importance of health, and its centrality to national development.Â  No prospects for development will be realised if the population suffers from ill health,
and if visitors and investors alike are not assured of access to quality health care in the country.

With the rain season about to start, the public health sector will have no capacity to handle outbreaks of archaic diseases such as cholera and typhoid.

The present situation has been exacerbated by poor remuneration, working conditions and late payment of nurses and doctors in the public service.

As PDP, our position remains that the socio-economic crisis in Zimbabwe can only be solved by a National Transitional Authority (NTA).

Under an NTA government, the priority will be to rebuild the economy which will result in a Zimbabwe with a revenue base and ability to finance critical institutions like healthcare institutions. A revived economy will also ensure the realisation of the peopleâ€™s right to health, as enshrined in the Zimbabwe constitution.