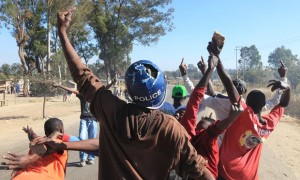 HIGH Court Judge Justice Happias Zhou on Thursday 22 September 2016 released 57 activists who have been in custody since their arrest last month for allegedly participating in a protest demo demanding electoral reforms on $30 bail.

The 57 who are represented by ZLHR members Obey Shava and Jeremiah Bamu are being charged with public violence. They were denied bail at the Magistrates Court, compelling their legal counsel to appeal at the High Court.

Magistrate Bianca Majwande dismissed an application for refusal of further remand filed by ZLHR members on behalf of Mabvuku residents who were arrested and charged with public violence for allegedly participating in demonstration on 4 July against police corruption and a $200 fine regime gazetted through Statutory Instrument 41 of 2016 were further remanded to 27 October 2016.

The Magistrate also gave notice to the State to set a trial date and failure to do so would result in the removal of the 51 from remand. She also relaxed the reporting conditions of the residents who are all male to once a month.