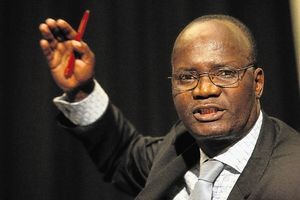 From facts that are now in the public domain, both the Minister of Higher Education, Jonathan Moyo and his deputy, Godfrey Gandawa, have a prima facie criminal case to answer. The two public officials allegedly siphoned the sum of US$270 000 from the Zimbabwe Manpower Development Fund (Zimdef).Â  Zimdef was created to benefit students at tertiary institutions in the whole country. Essentially, therefore, Zimdef is constituted of taxpayersâ€™ money.

The MDC has stated, times without number, that corruption, particularly in the public sector, is at the root of the political and socio â€“ economic crisis that is presently bedevilling the nation. For many a time, Zanu PF Cabinet Ministers and other highly placedÂ  bureaucrats in the civil service have brazenly stolen and/or abused public funds and public resources such as farming inputs and machinery etc.

Recently, the Zanu PF regime had to railroad an Act of Parliament that ensured that the State inherited the Reserve Bank of Zimbabwe debt in the sum of US$1,3 million. The RBZ debt was largely constituted of debts that the central bank had incurred; particularly during the Gideon Gono era as the RBZ Governor. Gono had pioneered a rapacious and criminal style of administration at the central bank wherein the apex bank undertook quasi â€“ fiscal activities such as buying farming inputs,farming equipment and posh houses for top Zanu PF officials as well as some High Court and Supreme Court judges.

It is apparent that thieving of public resources has always been the Zanu PF way of running matters of State.It is indeed shocking to hear Jonathan Moyo raising the lame and very ridiculous excuse that he stole Zimdef money in order to buy bicycles for villagers in his Tsholotsho North constituency because other Zanu PF politicians in other regions of the country also steal public funds in order to tar roads to their rural homesteads! Jonathan Moyo should be told, straight in his face, that stealing is stealing and also that stealing is a criminal offence; no matter who commits the act of stealing and/or fraud.

In fact,if Zimbabwe is to successfully extricate herself from the debilitating socio â€“ economic degradation,we should adopt a zero tolerance policy towards corruption.

It is a notorious fact that all Zanu PF Cabinet Ministers are forehead deep in corruption. The criminal exploits of Samuel Undenge, the Minister of Energy & Power Development, have also been very well â€“ documented in the public domain.

Obert Mpofu earned himself a very notorious reputation of high level corruption during the time that he was Minister of Mines & Mineral Development. We can actually write a book of no less than 5000 pages that details the corrupt and criminal dealings of each and every one of the Zanu PF Cabinet Ministers. The whole Zanu PF State edifice, right from the very top, is corrupt to the bone marrow!

In these circumstances, therefore, the MDC would like to challenge the Zimbabwe Anti â€“ Corruption Commission (ZACC), the Zimbabwe Republic Police (ZRP) and all the other crime â€“ fighting agencies to descend upon public officials who have been pilfering State resources; not only at the Ministry of Higher Education but, indeed, at all other public bodies such as State corporations.

Transparency International recently released a report that established that no less than US$1 billion is lost to corruption in Zimbabwe every year. This could actually be an understatement because President Mugabe himself, just a few months ago, confessed that no less than US$15 billion worth of diamonds had been siphoned out of the country. To date, no investigation has been conducted to establish the whereabouts of this massive loot of public resources.

Thus, we call upon both the ZACC and the ZRP to immediately arrest Jonathan Moyo, Godfrey Gandawa and all other public officials who have been implicated, on very reasonable and tangible grounds, in the criminal offence of stealing and defrauding the State of its money and other public resources. All these people should have their day in court. At the very least, this is the very essence of the rule of law.