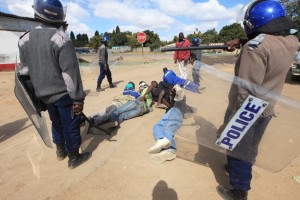 In recent months, the imploding economy and a brutal crackdown on civil liberties have triggered aÂ wave of demonstrations as Zimbabweans bear the brunt of high unemployment and a biting cashÂ crisis.

Government has reacted to protests by unleashing the repressive state apparatus to pulveriseÂ demonstrators who, in a few cases, have also turned violent. Mugabe has sparked outrage byÂ criticising the judiciary for handing down judgements allowing peaceful demonstrations.

Riots first broke at Beitbridge Border Post on July 1 with police failing to combat the demonstrators.Â In the aftermath, all the police officers were transferred after the Police Internal SecurityÂ Intelligence at the border town complained the police officers had ignored their early warning callsÂ on the riots.

Sources said security, police and intelligence services have embarked on a crackdown on dissent,Â targeting leaders of social movements such as #Tajamuka. The leaders have also been targeted atÂ nightclubs and in their homes.

â€œQuick reaction units of Harare-based units are on standby. The state now knows what social mediaÂ can do to destabilise the regime so they have come up with several measures to contain this. At thisÂ stage there havenâ€™t been reports of extra-judicial killings but torture and intimidation of socialÂ movement leaders,â€ a source said.

â€œFor as long as the protestors do not provoke security forces, soldiers wonâ€™t use any liveÂ ammunition on civilians who are protesting.â€

Last month, the Zimbabwe Independent reported that government had covertly deployed theÂ military and other security forces to surround the protests-wrecked capital Harare, whileÂ unleashing a crack unit to operate under cover to crackdown on the opposition and civil societyÂ groups stepping up pressure for Mugabe to reform or quit.

A few weeks later #Tajamuka spokesperson Silvanos Mudzova was abducted from his home by sixÂ unidentified man before being assaulted and left for dead.

This came after Mugabe threatened to quell the current wave of demonstrations and riots rockingÂ the countryâ€™s structure-induced stability, saying: â€œThey are thinking that what happened in the ArabÂ Spring is going to happen in this country, but we tell them that it is not going to happen here.â€

The Arab Spring was a series of anti-government protests, uprisings and armed rebellions thatÂ spread across the Middle East in early 2011

The Zimbabwe Independent reported that nine lieutenant-colonels and 65 majors from theÂ Zimbabwe National Army (ZNA) and other senior Zimbabwe Defence Forces officers have beenÂ deployed under the cover of command agriculture, with some manoeuvring into strategic positionsÂ around Harare â€” behind the scenes â€” to position themselves to swiftly move and quash any revoltÂ as political discontent and social unrest grow.

Senior military officers have been indispensable in maintaining Mugabe and Zanu PF in power.

Therefore, the deployment of the army is seen as the last resort after police have been struggling toÂ contain the spreading protests, from the Beitbridge riots in July to Harareâ€™s almost dailyÂ demonstrations now increasingly becoming confrontational and sometimes violent, especially whenÂ police use brutality to stop them.

Zimbabweâ€™s military has in the past intervened in civilian affairs, leaving a trail of human rightsÂ abuses and killings, including the Gukurahundi massacres.the independent