Following the crisis that has rocked Zimbabwe over the past months, The Zimbabwean got in touch with Crisis in Zimbabwe Coalition Spokesperson, Dumisani Nkomo on the current situation and best possible way forward. Below are excerpts of the interview; 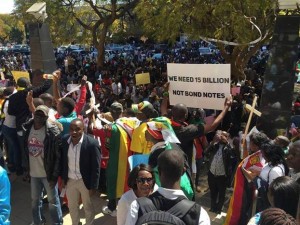 Q: From a civic society perspective, how does the current economic and political situation in Zimbabwe affect democracy and development?

A: The economic and political situation in Zimbabwe has severely handicapped and hindered both democracy and development. Significantly the economy has shrunk to the pre U .D I period and possibly the pre Federation times. Quite possibly whilst Zimbabwe is in 2016 the country might be somewhere in 1949 in terms of employment generation, economic growth and sustainable incomes .Democracy in Zimbabwe is like a ghost everybody talks about it but nobody has ever seen it .In spite of a fairly good constitution the state has failed dismally to respect and uphold the fundamental rights of citizens including the right to demonstrate, freedom of expression and the right peaceful assembly and association. Zimbabwean police have made the Nazi tactics of the Rhodesian police look like kindergarten and at best Early Childhood Development antics with a show of unfounded brutality.

Q: Â Zimbabwe adopted a new constitution that was largely hailed for containing a rich Bill of Rights but rights violations are on the increase. What does this tell as far respect for the constitution is concerned?

Q: Given the Zimbabwean crisis, what do you think should be the role of regional, continental as well as international bodies?

A: Regional ,continental and international bodies must holdÂ  the Â government to account for itsÂ  excesses . The government of Zimbabwe is a signatory to various treaties , protocols and covenants at International level including but not limited to the following :

-SADC Guidelines on the Conduct of Democratic Elections

Needless to say the Government of Zimbabwe has failed dismally to adhere to the above and other international covenants as well. Bodies such as SADC, the African Union and the United Nations play a key role in ensuring adherence to such agreements .SADC and the A.U should bear in mind that instability in Zimbabwe is a threat to regional and continental peace, security and economic stability.

Q: How do you evaluate the efforts of progressive forces within the country as well as these regional, continental and international bodies in resolving the Zimbabwean crisis?

A: Progressive forces should be more progressive by uniting in their efforts to dismantle the system of dictatorship epitomized by ZANU P.F rule. The National Electoral Reform Agenda is a positive way forward. A broader front which includes civil society is needed to pressurize the regime to implement political and economic reforms.

Q: Rights violations have escalated at a time the country is set to hold polls in 2018. What possible impact could this have on the forthcoming polls?

A: Human rights will continue to be violated in the run up to the next elections especially because of the emergence of new players such as Zim P.F and the rise in factional politics within the ruling party.

Q; Recently, President Mugabe threatened to pull out of the United Nations. How possible is this and what could be the possible implications?

A: The threat to pull of the U.N should be dismissed with the contempt that it deserves. Such a move would be suicidal, genocidal, anachronistic and archaic in a world which has evolved into a global village .This is typical of isolationist Stone Age political thinking detached from global socio political and economic realities.

Q: What is CIZC’s view on the best way forward as far as resolving the Zimbabwean crisis is concerned?

A: Democratic forces must form a broad united front to lead nonviolent mass noncooperation and push for a transitional authority which will run the country for between three to five years before fresh elections are held after economic and political reforms. The country needs to hold elections within the gambit of reform and stability.