The recent appointment of Zanu PFâ€™s convicted fraudster, Fredrick Shava, as the president of the respected United Nationsâ€™ Economic and Social Council (Ecosoc) is inappropriate for Zimbabwe and the UN at large as he is a person of questionable credibility and standing. 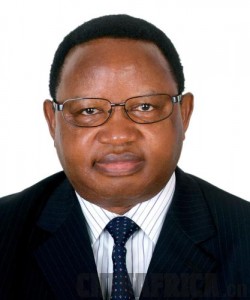 Ecosoc is one of the six principal organs of the UN, responsible for coordinating the economic, social, and related work of 14 UN specialized agencies.

However, the new Ecosoc president, Shava, was one of the Zanu PF ministers who in the late 1980s, removed from government due to corruption in the Willowvale Scandal.

He was then arrested, tried and convicted of perjury.

However, like other Robert Mugabeâ€™s bootlickers, Shava was immediately pardoned and has since then been enjoying Mugabeâ€™s patronage.

In another case in 2006, Shava tried to loot agricultural implements at a Kwekwe farm, which he had been allocated under the fast-track land reform programme.

This is evidence enough that he is a highly corrupt Zanu PF official who should instead be in jail rather than at the UN. His new appointment as Ecosoc president, Shava is taking over from Ambassador Oh Joon of South Korea who hails from a country with a shining example of what socio-economic development is compared to the corrupt activities of Shava.

For Shava this appointment is only for personal benefits considering that he has gone for months without receiving his salary from his broke government as the countryâ€™s ambassador to the UN.

He has nothing to take to Ecosoc as the Zanu PF government is taking the country in the opposite direction than other developing countries.

More than three years after Zimbabwe held its elections, the country is now worse off than it was in 2013 with an unemployment rate of over 94%

While Shava is taking over as the Ecosoc president, back home Mugabe is threatening to pull out of the UN.

Meanwhile, as the Peopleâ€™s Democratic Party (PDP), we strongly condemn the delusional statements made by Mugabe that he will pull Zimbabwe out of the United Nations (UN).

UN organs, UNICEF, UNAIDS, WHO and UNDP are playing critical roles in Zimbabwe after Mugabeâ€™s Â government has abandoned and impoverished the people in pursuit of factional and succession Zanu PF fights.

The threats show that Mugabe and Zanu PF do not want the international community to voice its concerns over the deteriorating human rights violations and demands for key reforms in Zimbabwe ahead of the 2018 elections.

Losing popularity from the electorate, Mugabe wants to ensure that the 2018 elections are not transparent and is currently concentrating on rigging ahead of the next ballot vote.

Therefore, his threat for calling for Zimbabwe to pull out of the UN, which is now one of the biggest aid agencies providing aid to suffering Zimbabweans, are meant to create a frosty relationship with the world body ahead of the elections.

We therefore reiterate that the only way to get rid of this corrupt ZANU PF and get Zimbabwe working again is put in place a National Transitional Authority, which will effectively deal with corruption and begin the necessary process of genuine international re-engagement.