When Guy Watson-Smith lost his family farm at the height of Zimbabweâ€™s controversial and often violent land grab, he could scarcely have imagined that one day he would be sitting in the same room with the new, powerful owner of the farm he loved so much. 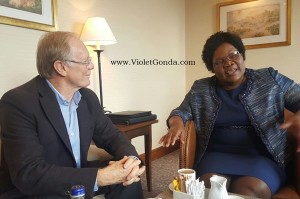 The courts had failed to ensure that he was compensated for the loss of the family farm to General Solomon Mujuru, former commander of the Zimbabwean army.

Watson-Smith also had to watch hisÂ community disintegrate in the ongoing violence in most districts where white farmers operated. He comforted Alan Dunn, a neighboring farmer and close friend as he died after a beating from war veterans in 2000.

The courts did tell Mujuru to return all the farm equipment and move-ables on the Watson-Smith farm, in Mashonaland East. Eventually, Mujuru did hand back most, but not all of the household goods, not the equipment or cattle nor wild life, nor the proceeds from the valuable tobacco crop which had been financed by Watson-Smith and was sold on the auctions in Harare in March 2002 for more then US$700 000.

Solomon Mujuru told friends and associates at that time he planned to take over this farm because he believed his ancestors came from the district before whites arrived more than 100 years ago.Â Mujuru had gone to war against white-ruled Rhodesia. And as Robert Mugabe told the BBC in Mozambique in 1977, thousands of young people went to war against Rhodesia to get the vote and get their land back.

But General Mujuru reportedly believed in property rights in independent Zimbabwe and he bought two farms near Shamva and allegedly paid off bank loans on both of them. Later he also bought a farm in Ruwa, his wife told the media on several occasions.

Watson-SmithÂ lost everything â€“ the farm he had owned for 20 years, the much loved home he developed for his family, his investment in all the farm buildings, the fences, dams, irrigation equipment, workersâ€™ village, piping, fertiliser, etc. Even the family pets, such as the horses did not escape and had to be shot.

Speaking on the Hot Seat programme in London in the last week, Solomon Mujuruâ€™s widow, former Vice President Joice Mujuru insisted she didnâ€™t invade the farm, and said the Watson-Smithâ€™s farm. Alamein, Â was taken by her husband.Â  Although she revealed both her familyâ€™s Shamva farms were taken during the post 2000 land grab.

The 1400 hectare Alamein farm (a.k.a Ruzambo) is situated in the Beatrice district Months before Mujuru ousted him, Watson-Smith had finished paying off all debts he accumulated after 20 years of farming. He also had more then 300 cattle and 600 wild animals which he brought on to the farm in the last few years before he was evicted. He was one of Zimbabweâ€™s top tobacco farmers.

When challenged if it was fair that her family cashed in hundreds of thousands of dollars from the sale of the tobacco crop they had not grown, Mujuru said it was â€œnot fairâ€ and revealed she had been â€œlookingâ€ Â for the evicted farmer. She had also reached out to former opposition lawmaker David Coltart to help locate him â€œbecause I wanted to give him what is due to him.â€

â€œI am a reputable businessperson.Â I am a chicken farmer, and it is hard,â€ she said. â€œI am ready to work and pay him.â€

One of Joice Mujuruâ€™s associates did contact Watson-Smith in 2013 and asked him how much he would sell the farm for. Watson-Smith gave him the sum provided by the Valuation Consortium (VALCON) in Harare, which has Â professionally valued nearly all the white-owned farms which were taken since 2000.

Perhaps Mujuru did not know about this approach to Watson-Smith who has used the same legal firm in Harare for the last 15 years and is in contact with the Commercial Farmersâ€™ Union, and VALCON.

Watson-Smith, was forced to leave farming behind in Zimbabwe at the end of 2001 and started a new life near Nice, in the south of France, and has developed a successful real estate business in one of the richest parts of the world.

Hot Seat tracked him down shortly after the interview with Mujuru and set up the symbolic first meeting between the so-called farm invader and the evicted white farmer.

He flew into London, with his son, Lao, the day after Hot Seat interviewed Mujuru. He wanted to meet her, but he was anxious, too. He had taken the legal route since he had to leave the farm but had not even received the damages he was awarded by the High Court, Â and like the majority ofÂ Â evicted farmers, he had not been paid any compensation, for land or improvements.

The idea, after so many years and after so much bitterness, that these two Zimbabweans who come from such Â different backgrounds could meet and, in theory sort it out between them, was an irresistible story for any journalist covering the ongoing trauma in Zimbabwe.

The meeting was held at the expensiveÂ Millennium Hotel in Mayfair, where Mujuru was staying. She was in the UK, Â at the invitation of the Royal Society of International Affairs at Chatham House, London, to drum up support for her new political party â€“ the Zimbabwe People First party.

The 61-year-old was thrown out of the ZANU PF party two years ago after she was accused of plotting to topple 92-year-old Mugabe.

Watson-Smith was exhausted after arriving in London, not least because he had travelled through the night from France to meet Mujuru. And he had never met her before and he said memories of his lost home, lost friends, and lost life in Zimbabwe, flooded over him as he arrived in London.

All previous interactions he had were with Solomon Mujuru who died in a mysterious fire in Watson-Smithâ€™s old home, on the farm in 2012.

Mujuru offered him tea, and the three, including Watson-Smithâ€™s sonÂ discussed many aspects of Alamein farm, its progress and the welfare of the workers left behind after the invasion.

Watson-Smith said: â€œItâ€™s been a long 15 years since we left the farm and itâ€™s been hard. My family started again in a new country from nothing. And we have pursued very slowly and very quietly through the courts particularly the moveable assets which we were forced to leave behind.â€

Joice Mujuru said her People First party believes this meeting was an important step in establishing precedent, and the re-establishment of the natural rule of law and accountability in Zimbabwe since the land invasions.

â€œThe meeting is to try and solve this issue amicably. I canâ€™t hide my excitement because I have been longing to talk to Watson about this land issue, which I now enjoy very much and I must now do my uttermost best to put the land to good use.â€

Mujuru said issues of reconciliation shouldnâ€™t just be rhetorical. â€œI have a party that has a policy on practical reconciliation and we must show it.â€

They agreed to extend the meeting to the following day and to include their lawyers in Harare to work out the draft agreement and to make arrangements to settle the damages awarded Watson-Smith last year.

â€œWhat we have achieved at this juncture is a signed â€˜Memorandum of Understandingâ€™ detailing & confirming acceptance of the events that led to the occupation of Alamein (a.k.a Ruzambo in some articles), coupled with a commitment to progress towards compensation discussions via our respective legal teams,â€ Watson-Smith said.

He explained this agreement was not about compensation for the land nor the â€˜improvementsâ€™ on the farm such as homes and buildings, farming infrastructure, dams, plantations, cleared land, fencing and conservation works.

â€œIt concerned solely the theft of â€˜Moveable Assetsâ€™ (vehicles, tractors & equipment, livestock, game, the crop in the land, etc). The High Court of Zimbabwe established the legal values of the moveable assets in an order for damages dated late 2015, and that forms the basis of our â€˜MOUâ€™ with her,â€ Watson-Smith explained.

The courtÂ rulings dating from 2002 and in 2015, ordering the return of Watson-Smithâ€™s assets and payment of compensation for damages, totals US$1,469,440 plus compound interest.

Questions remain about where Mujuru will find the money, which is estimated now to be more than US$2m, with interest and Mujuru has also accepted to pay Watson-Smithâ€™s legal fees.

Zimbabweâ€™s land question remains unresolved but Hot Seat listeners should recall that the 2013 constitution says that the UK must pay for the land taken from white farmers, and the government will pay for the â€œimprovements.â€™

Earlier this year the governmentâ€™s landsâ€™ department Â met with members of the Commercial Farmers Union, and VALCON and all sides restated that compensation must be achieved. But the reality is that the government of Zimbabwe says it has no money to even begin to pay out, but has recently established a land commission and is allegedly valuing farms although it has no qualified valuers, nor documentation it needs to assess what was on the farms prior to land invasions.

The statistics are important too. So far, VALCON,Â using qualified surveyors, has valued 5000 seized farms, or title deeds, owned by 3000 white farmers on seven million hectares.

This is the vast majority of farms taken since 2000. Among those valuations is one for Guy Watson-Smithâ€™s property.

At the end of the discussion with Mujuru, the former farmer pointed out that no agreement for compensation for the land and the â€˜improvementsâ€™ on Alamein farm has yet been reached and it is not expected any time soon.

Since the constitution was changed in 2005, all land taken from white farmers since 2000 is state owned.

Watson-Smith says he believes the British should pay out evicted white farmers for the land taken from them from 2000. Â â€œIt would be a small investment by the British and would be of such an advantage to Zimbabwe and future trade in the subcontinent. I wish the British would take a different approach and I believe it would help the process of reconciliation enormously.â€

Full Hot Seat Interview with Joice Mujuru can be accessed via this link: https://www.youtube.com/watch?v=5ko0gIc7z7g