There was no breast-beating or wringing of hands when Zimbabwe People First leader Joice Mujuru made a wooden pitch for respectability at the Royal Institute of International Affairs at Chatham House in London on Thursday. 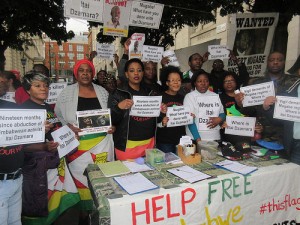 Of the abuses committed during her 34 years in the Mugabe inner circle she confessed to nothing, admitting only â€˜guilt by associationâ€™. Certainly no repentance. She had been kicked out as Vice President, she said, because she was a â€˜moderateâ€™ who favoured restoring relations with the West. (Not, as Mugabe alleged, being a â€˜witchâ€™.)

But it was nevertheless a bit magical that Mrs Mujuru arrived at Chatham House in what we were told was the Ambassadorâ€™s car â€“ an unheard of courtesy to an â€˜oppositionâ€™ figure (let alone a â€˜witchâ€™ of the West).

What was equally surprising was the small group of prosperous-looking Mujuru supporters with sparkling new banners gathered outside the front door. Surprising because other Zimbabweans â€“ perhaps less well-dressed and suspected of being less welcoming â€“ were herded behind a metal barricade on the far side of the road, watched over two police officers.

On this occasion a few Vigil supporters were allowed into Chatham House to hear what was going on. They say Mujuru made all the right noises (reading from a prepared script): â€˜We want a government responsive to the needs of the citizens . . . there is a generational disconnect . . . country ruined by mismanagement of old guard . . . we will respect the constitution , , , repeal repressive legislation , , , observe property rights . . . restore collateral value of land . . . pay compensation , , , repeal indigenisation . . . reduce corruption . . . depoliticise, privatise parastatals . . . allow dual citizenship . . . diaspora vote . . . â€˜

It could have been a party political broadcast for the Vigil. But we wouldnâ€™t choose anyone with her history in Zanu PF to deliver it. Our supporters at the Chatham House meeting didnâ€™t get a chance to ask her the question: â€˜What do you know about the election rigging?â€™ At the very least the Vigil wants the full details from the Zanu PF defectors so that the world knows that all elections in the last two decades have been cooked.

Mrs Mujuru is reported to have had a meeting in London with the owner of the farm on which she lives and is said to have offered to pay him a million dollars or so in compensation. She told the owner that she is a poor chicken farmer but we believe she is loaded. Nevertheless, Mr Watson-Smith should know that any compensation he gets is likely to be paid in bond notes.

The Vigil certainly welcomes Mujuru to the ranks of the struggle for democracy. But we remain deeply distrustful of those who have been for so long close to the heart of Zanu PF evil. â€˜Peace and reconciliation?â€™ The question remained unaddressed at the Chatham House meeting.